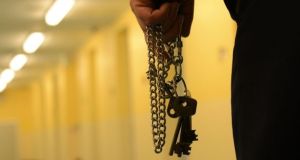 The increase in the number of people committed to prison has surged to a 10-year high necessitating the earlier release of some prisoners and an audit to find more bed capacity in jails, according to the latest annual report from the Irish Prison Service due for release this week.

The service allowed more prisoners to avail of community release programmes in 2019 by changing the eligibility criteria.

The bed-capacity audit of prisons last year had resulted in the capacity of the Dóchas Centre women’s prison being increased by almost 40 per cent, from 105 beds to 146, with the process continuing in other jails.

The annual report for 2019 also shows that more than one-third of all prisoners in the 12 prisons across the Republic said they lived in Dublin. The cost of keeping a prisoner in jail for a year increased by about 2 per cent to €75,349 last year, mainly due to pay restoration for many of the 3,400 staff working in prisons.

In 2019 the number of people committed to prison increased by 10.7 per cent, to 8,939, including 6,276 men and 894 women. It was the biggest increase since 2010, with more people now being imprisoned for the non-payment of fines as people given the option of paying a fine, under the Fines Act 2014, were not availing of it.

Immediately it was introduced, the number of people committed for non-payment of fines plummeted but last year it had begun to climb again; from 455 committals in 2018 to 860 last year.

The report for 2019 says there had been a “significant increase” in community release numbers, which are periods of structured release granted to some non-violent prisoners. Some 599 prisoners enjoyed periods of release under that scheme in 2019. Separately, the average number of prisoners on temporary release on any one day was 264.

However, the figures for 2019 and 2018 are not compiled in the same way, meaning it is not possible to make a comparison on releases over the two years.

Director general of the Irish Prison Service Caron McCaffrey says in the annual report the number of prisoners on remand in 2017 was 584, though that had increased to 707 in 2019, which was also putting pressure on the service.

“As the State’s only remand facility at Cloverhill Prison has a bed capacity of 431, this requires remand prisoners to be spread across the prison estate,” she said of the dedicated capacity for remand prisoners now being unable to facilitate the sheer numbers being held on remand, because bail has been refused to them.

She added another feature of remand prisoners was “the increasing seriousness of the criminal charges they face” which means they are required to be detained for much longer periods and at high levels of security in jails.

The 8,939 committals to prison last year involved 7,170 people, with a number of prisoners committed to jail several times.

Some 76 per cent of prisoners committed to jail in 2019 were serving 12 months or less, with only 46 people committed for more than 10 years, including nine life sentences.

In 2019, there were 490 committals relating to immigration issues involving 477 detainees, an increase of 18 per cent, or 76 cases, on the previous year.