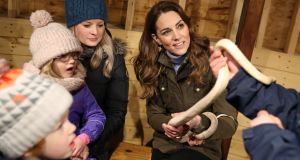 Duchess of Cambridge Kate Middleton paid a visit to Northern Ireland on Wednesday as part of her British Royal Foundation project of supporting young children and their families.

The duchess visited the Ark Open Farm in Newtownards, Co Down on Wednesday afternoon where she met children, parents and grandparents.

She discussed with them how to help children become happy adults and the role of parents and society in ensuring children have the best possible start in life.

The duchess’s solo visit is part of a survey she is promoting to learn more on how experiences in the early years can impact upon later life.

According to her office the survey “is designed to bring together the thoughts of as many people as possible – recognising that everyone has a role in ensuring strong, healthy foundations for the youngest in our society that will positively affect their lifelong outcomes”.

In recent weeks as part of that project the duchess visited Birmingham, Cardiff, Woking and London where, as well as children and parents, she discussed the project with academics, experts, organisations and children’s care practitioners.

After being given a guided tour of the Ark Open Farm the duchess flew to Scotland to continue her early years work.

The duchess with her husband, Prince William the Duke of Cambridge is to visit the Republic early next month.

He asked why the First Minister and Deputy First Minister were “ducking” an invitation for her to address the Northern Ireland Assembly – “the only devolved legislature she has never addressed”.

The office of Ms Foster and Ms O’Neill in its reply to Mr Allister said that in the absence of any specific proposal by the Assembly for such an invitation that the question was “hypothetical” and it did “not consider it appropriate to respond in the terms requested”.