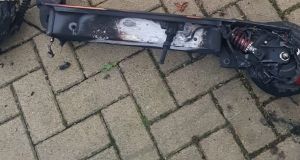 An electric scooter, which had been charging, went on fire. Photograph: Dublin Fire Brigade

A family had to be evacuated from their home in west Dublin on Saturday morning after an electric scooter, which was charging, went on fire.

Dublin Fire Brigade said there were no injuries and have urged the public to check electric scooters for a “genuine” CE safety mark and to never leave them unattended while charging.

The fire brigade wrote on social media on Saturday: “Firefighters responded to a house fire in west Dublin this morning.

“An electric scooter, which had been charging, was alight. The family evacuated and there were no injuries. Check electric scooters for a genuine CE safety mark and never leave them unattended while charging.” The rising popularity of e-scooters has caused some controversy. Last month a Department of Transport official told an Oireachtas transport committee last month that e-scooters, segways, electric skateboards, powered mini-scooters, electric unicycles and non-pedal assisted electric bicycles are “not considered eligible for use on a public road or in a public place” and “despite opinions to the contrary, there is no legal grey area” .

More than 500 submissions had been made to a public consultation process on the legalisation of e-scooters, and the department would be submitting a report to Minister for Transport Shane Ross on the results in early 2020, along with a recommendation in relation to legislation.

Road Safety Authority (RSA) chief executive Moyagh Murdock told the committee it was recommending a “restrictive approach” to the regulation of e-scooters in relation to the age of users, the providers of the devices and the roads on which they can be used.

Ms Murdock said she was concerned about the quality of the products being used.

“A concern we would have is that they are not regulated by any standard in any jurisdiction in Europe. ” The devices were being imported from “China and other far eastern countries” and “aren’t regulated by any machinery standards”, she said. Due to their design with a long stem they were prone to “natural torques” she said and “could break easily”.