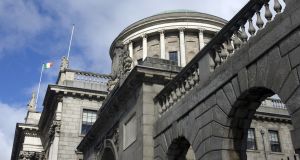 Bank of Ireland will face a €133,000 write-off on the mortgage over the course of the financial rescue plan. Photograph: Dave Walsh/VW Pics via Getty

The High Court has granted a Co Laois woman a debt write-down of almost €175,000 on her Bank of Ireland mortgage after her husband’s business collapsed and he was declared bankrupt.

Mr Justice Denis McDonald approved a personal insolvency arrangement for Rebecca Forde Egan, who has total debts of €639,000, that will see the mortgage on her four-bedroom home in Ballymorris, Portarlington – a property valued at €410,000 – written down to €451,000.

It is proposed that €40,651 would be paid to the bank during the six-year arrangement, leaving the bank facing a €133,000 write-off over the course of the financial rescue plan.

Ms Forde Egan, a mother of three daughters, told the court her husband Larry Egan filed for bankruptcy in 2009 after the failure of his business where she was employed.

She said her husband was out of regular employment for several years and she was unable to return to her job in the public service after taking a six-year career break to work for her husband.

She now works for the HSE in Dublin, while her husband works as a regional sales manager.

The judge rejected Bank of Ireland’s objection to the arrangement that it would be unfairly prejudiced by not being permitted to realise Mr Egan’s 50 per cent share in the family home.

Mr Justice McDonald pointed out that the bank would be paid €451,000 on its mortgage – a significant increase on the market value of the home – and that it would receive the dividend of €40,651 over the six-year arrangement, amounting to a return of 72 cent for every euro owed.

In contrast, it is estimated that the bank would receive €369,000 in the event of Ms Forde Egan being declared bankrupt, amounting to a lower return of 60 cent for every euro owed. “It is therefore impossible to see how the bank will be unfairly prejudiced,” the judge said.

Ms Forde Egan, who was represented by Keith Farry BL and personal insolvency practitioners McCambridge Duffy, disputed the bank’s claim that it had originally loaned money to the couple to buy a property in France.

She claimed the bank’s “own lending officer put forward the ‘story’ about the French property to ease the application process.”

The money was used solely for the purpose of renovating and improving the family home in Co Laois.

Mortgage write-downs through court-approved personal insolvency arrangements were introduced in legislation in 2012 to deal with the large amount of unpaid mortgage debt across the country in the wake of the property crash and economic crisis.

The legislation was changed in 2015 to create a court appeals mechanism to overrule the “bank veto” blocking the write-down of debt in the arrangement.