‘It’s a nightmare. You’re afraid of your life to sleep’, says elderly resident 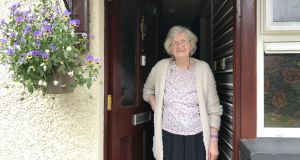 Avril McGlinchey lives in the Fountain in Derry, which has come under attack from youths throwing petrol bombs, bricks and bottles

On Saturday night, 86-year-old Avril McGlinchey slept in her clothes. Earlier, the area where she lives, the Fountain in Derry, had come under attack from youths throwing petrol bombs, bricks and bottles.

“It’s a nightmare. You’re afraid of your life to sleep,” Mrs McGlinchey said. “If anything came, how could I run? You need to sleep with your clothes on, bag packed, handbag and money ready.”

The last predominantly Protestant area on the city’s west bank, the Fountain is home to about 350 people, clustered under the shadow of Derry’s walls, separated from Catholic Bishop Street by a “Peace Wall”.

For the last two weekends missiles have been thrown by youths. They then attack police, or engage in anti-social behaviour in their own areas. On Sunday, they did this by blocking a main road in the Bogside with burning bins.

On Saturday, 30 petrol bombs were thrown, according to the Police Service of Northern Ireland (PSNI). Forty-two were hurled on Sunday. Some did not get as far as the Fountain, with one landing in a sheltered housing unit for the elderly on Bishop Street. Scorch marks were still visible yesterday.

Little of this can be seen from within the Fountain. The only way in from Bishop Street is through a corrugated iron passageway set into Bishop’s Gate, one of the historic entry points into the walled city.

Today the route has its own metal gate, padlocked at 9pm each night. At a first glance, it appears a normal estate with brightly-coloured flowers dotting patches of grass, children’s slides and paddling pools in the gardens. Kerbs are freshly-painted in red, white and blue, and flags – representing the gamut of allegiances from Northern Ireland and the Union Jack to Israel and the UVF – hang from lampposts and outside homes.

Today, a PSNI Land Rover sits in the estate, part of a pledge to step up patrols following the increase in tensions. “Last night, we were out until one o’clock brushing everything up. It makes me angry. It’s all just fun to them,” says Catherine Jackson, who lives in the last house in her row.

Avril McGlinchey’s daughter, Helen Jones, lives nearby in a house facing the city walls: “A few weeks ago I had stones pelting at my window. It was young children. Bricks, stones, petrol bombs, no matter what time you go to your bed, you’re terrified.”

Her greatest fear is that a petrol bomb will ignite the oil tank behind her house: “You hear them outside shouting, ‘You Orange B’s’, and you’re doing nothing, you don’t retaliate back, you’re just in the house, terrified, you’re just trying to live your life.

“I’ve two daughters, and they’re in there, terrified. I’d love to move but the husband’s thran [stubborn], he won’t move, and my mother’s next door, she won’t move but at the same time she’s terrified.”

Having family nearby is common in the Fountain. Many have lived there all their lives, have close relatives in the estate and say it’s part of what makes them proud of their area.

“It’s a brilliant place to live in and we won’t be intimidated out of our homes,” says one man who will not be named. “If anything, it would make us more determined to stay, and a lot of families are the same.”

His seven-year-old daughter cried herself to sleep after bottles were thrown, he says. “The first night she saw it, she started to cry, she said, ‘Why are they doing this?’ She’s too young to understand.”