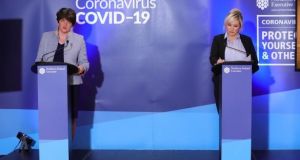 Ten more people have died in Northern Ireland from the coronavirus, according to the latest figures from the North’s Department of Health.

This brings the total number of Covid-19 fatalities in Northern Ireland to 309 – a death rate that appears to be broadly comparable to that of the Republic.

The department also reported that 66 more people have tested positive for coronavirus in Northern Ireland. The total number of people confirmed with coronavirus now stands at 3,374.

Most of these deaths occurred in Northern Ireland hospitals. These figures do not take into account those who died in care homes in the North.

On Friday the Northern Ireland Statistics and Research Agency reported that up to April 17th an estimated 96 people died in care homes and hospices in the North, which adds about a third to the department’s hospital list.

Allowences must be taken into account for discrepancies in the data, but based on these figures it seems that the coronavirus death rates North and South are roughly similar.

Taking the 309 hospital deaths’ figure and adding it to the 96 care home and hospice deaths gives a total of 405 Northern Ireland deaths.

This gives a Covid-19 death rate of 21 per 100,000 of population in Northern Ireland which has a population of close to 1.9 million.

In the Republic the coronavirus death toll on Monday evening was 1,102. Based on the Republic’s population of 4.9 million that gives a death rate of a comparable 22 per 100,000 of population.

In the South, those compiling the figures argue that they are relatively up to date and include most care home fatality figures.

While this indicates broadly parallel death rates on both sides of the Border a truer comparison can’t be established until all or most of the data is collated.

And as pressure grows in some quarters for easing of the Covid-19 restrictions First Minister Arlene Foster and Deputy First Minister Michelle O’Neill insisted now was not the time “to gamble with people’s lives”.

“Now is not the time for impatience to get the better of us. No one should act as if coronavirus has been beaten. It hasn’t and we still have some way to go,” said Ms Foster.

Deputy First Minister Michelle O’Neill expressed disappointment to hear reports of “some people who seem to have decided for themselves that it’s time to relax the restrictions that are in place to save lives”.

“That kind of attitude is wrong, it is reckless and it is endangering lives. Until a vaccine is found it means we must co-exist with this virus,” she added.

Ms Foster also took issue with comments in the Sunday Times where Sinn Féin leader Mary Lou McDonald characterised Covid-19 as an “accelerant” to a united Ireland. She also described as “astonishing” the lack of a single North-South health policy for the island.

Said Ms Foster “I think the most important job for me as First Minister of Northern Ireland is to protect lives, to save lives, to make sure that our National Health Service, that great British institution, is not in any way overwhelmed by what is going on.

“So I do think it is regrettable that other leaders are interested in constitutional navel-gazing at this time. I think it would be important for us to look back with hindsight when we’re not in the middle of a pandemic. But for others, their priorities lie elsewhere. I think that is regrettable.”

Ms O’Neill said an all-island approach to health was not a political point but “just makes sense”.

The Ulster Unionist Party leader, Steve Aiken said it was “utterly shameful” that Ms McDonald “should seek to use this public health emergency to attempt to create selfish political opportunity in a crisis to advance Sinn Féin political ideology”.