Some 263 have died in hospital setting in region as confirmed cases reach 3,016 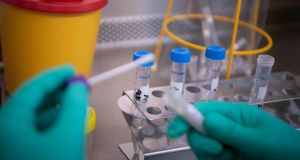 A total of 689 people who are either confirmed or suspected to have coronavirus are currently being treated in hospitals in Northern Ireland, with 37 patients in intensive care. Photograph: Marijan Murat/dpa/AFP via Getty

Thirteen more people with coronavirus have died in hospital in Northern Ireland, according to the latest figures from the Department of Health (DoH).

It brings the total number of deaths in hospital among patients confirmed to have coronavirus, also known as Covid-19, to 263.

According to the daily update released on Thursday afternoon, 142 further positive cases have been identified, bringing the total number of confirmed cases to 3,016.

A total of 689 people who are either confirmed or suspected to have coronavirus are currently being treated in hospitals in Northern Ireland, with 37 patients in intensive care.

More than 2,700 have been discharged.

There are outbreaks of coronavirus in 58 care homes. According to provisional data from the Public Health Agency (PHA), as of April 20th there were 297 confirmed cases of coronavirus in nursing and residential homes in Northern Ireland.

The daily DoH figures include only deaths in hospitals among patients who have been confirmed to have the virus.

The most recent figures from the Northern Ireland Statistics and Research Agency (NISRA), which include deaths in all settings including care homes and hospices, show that the number of fatalities up until April 10th was at least a third higher.

Updated statistics covering the period until April 17th are expected to be released by NISRA on Friday.