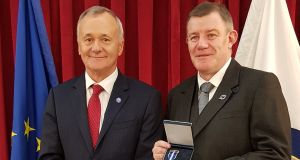 A Cork based Garda who has been involved in some of the country’s biggest drug seizures has become the first member of the force to be honoured by his European colleagues for his work in preventing maritime drug trafficking into Europe.

Det Supt Sean Healy, who is based at Anglesea Street Garda Station has been honoured by the Maritime Analysis Operations Centre - Narcotics (MAOC - N) based in Lisbon for his work in combating maritime drug trafficking off the Cork coast and into Europe.

He was involved in the investigation of some of the biggest drugs seizures in Ireland in joint operations involving gardaí, customs and the naval service including the Sea Mist in 1996 when €125 million worth of cocaine was seized in Cork Harbour.

Det Supt Healy received the MAOC N Medal for Distinction from the Director of MAOC N, Michael O’ Sullivan at a ceremony in Lisbon on Thursday night.

“Det Supt Healy has been involved in the investigation of major drug importation cases into Ireland over the past 25 years. His commitment, drive and successful operational activity is recognised at an international level and he is regarded as an expert on maritime law,” said Mr O’Sullivan.

MAOC N is an international Law Enforcement Organisation and comprises law enforcement and military personnel from seven European countries including Ireland all working together to prevent illegal maritime drug trafficking into Europe.

This year, the co ordination of the interception of cocaine shipments from South America by MAOC N resulted in seizures totalling €1.8 billion from transnational organised crime groups and led to the arrest of a significant number of persons on suspicion of drug trafficking offences.