Berwick Fountain has been a favourite meeting place for generations, says Lord Mayor 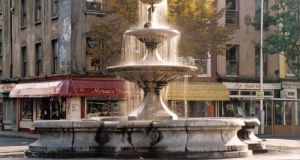 Cork City Council has unveiled plans for a major refurbishment of a historic fountain in the city centre including plans to floodlight it by night.

Lord Mayor of Cork, Cllr Tony Fitzgerald said the Berwick Fountain on the Grand Parade was a landmark feature in Cork city centre which was much beloved by generations of Corkonians and fully deserving of conservation.

“The Berwick fountain is much loved by the people of Cork and is a landmark where generations of young people have gathered. It is fantastic to see all the work being done at the moment on the city’s architectural heritage during this the European Year of Cultural Heritage”.

The fountain, which dates to 1860, was erected by Sergeant Walter Berwick, who came to Cork in 1847 as Chairman of the Quarter Sessions court dealing with minor crime.

Designed by Sir John Benson -who also designed the fountain in the nearby English Market - the fountain, made from cut Cork limestone, was formally presented by Berwick to the Lord Mayor of Cork, John Arnott on January 1st 1862.

Cllr Fitzgerald said the refurbishment work on the fountain will take place over an eight to 10 week period and will involve a comprehensive cleaning, treating and renovating of all stonework which will be overseen by the Cork City Council Architects Department.

Following the renovation works, the fountain will be lit in a warm white colour using LED lighting which will highlight its classic features while the colours can also be changed individually on each lamp as occasion demands, he said.

The conservation works on the fountain are the latest in a series in Cork city centre following on from renovations at the National Monument on Grand Parade and the Fr Mathew Statue on Patrick Street, as well as work on Patrick’s Bridge.