Minister says teachers have lost €15m in payments - as much as €2,000 per teacher - over strike 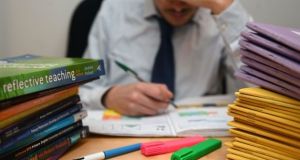 Second level teachers have lost out on €15 million in payments as a result of financial penalties imposed by the Government on foot of industrial action nearly three years ago, the Minister for Education Joe McHugh has said.

Teachers are looking for the Government to reimburse them for these losses and on Wednesday indicated that they were now considering legal action over the issue.

The Minister said he hoped his department and the Association of Secondary Teachers Ireland (ASTI) would sit down and talk on the issue which he said was a cause of concern to the union and its members.

“There has been €15 million in terms of payment lost, and I’m confident that when you bring people around table to talk on any difficult issue, you can make progress”, he said, speaking to reporters on Wednesday.

The amounts of the losses involved vary depending where an individual teacher stood on the pay scale and the date on which their increment was originally paid. However, union sources said €1,000 in losses could be at the low end of the scale and it could be €2,000 or more in some cases.

ASTI general secretary Kieran Christie told its annual conference in Wexford on Wednesday that the union had identified a number of potential grounds for legal action.

He said this may include a judicial review of the Government’s decision to implement provisions of financial emergency legislation (known as Fempi) in an arbitrary manner. He said the union was also looking “at the possibility that we may be able to consider an action for breach of ASTI members’ constitutional right to equality provided by Article 40.1 of the Constitution”.

On foot of its industrial action in 2016-17, the Government used Fempi legislation to impose penalties on ASTI members, including a freeze on incremental pay rises.

When the industrial action ended in June 2017 the Government lifted these measures. However, the original dates for the payment of increments were not restored, leaving union members with ongoing losses compared with the situation had the increment freeze never been put in place.

However, the Government decided not to impose similar sanctions under the Fempi legislation on nurses after their strike earlier this year.

Mr Christie said the ASTI “may be able to seek judicial review of the original decision to penalise ASTI members. We may ask a court to quash that decision on the basis that the decision to allow the Irish Nurses and Midwives Organisation (INMO) to remain within the terms of the 2018 (public service ) agreement, despite engaging in industrial action, means that the ASTI now has a legitimate expectation that the same outcome will pertain to them”.

He said: “There may also be possibilities for an action grounded in the concept of ‘breach of contract’. Our lawyers are looking at that too.

“Whether it is a realignment of ASTI members’ incremental dates or more besides I can tell you ASTI will pursue every avenue.”

Mr Christie said there was now “an unanswerable case” that ASTI members must be fully reimbursed all of their losses incurred on foot of the Fempi legislation. “ We are and will be demanding no less.”

The ASTI has also lodged complaints with the International Labour Organisation and the European Committee on Social Rights.

Mr Christie said the ASTI required certainty into the future regarding the application by the Government of financial emergency legislation.

“Our union, indeed any public sector union, were it to decide to undertake industrial action tomorrow, has no certainty on how they may be treated. Would the Fempi provisions be applied like they were to ASTI members or would they not, as in the case of the INMO? That now appears to be an open question. The very viability of unions and their modus operandi is challenged. Clarity must be restored.”

Meanwhile, members of the Teachers’ Union of Ireland (TUI) have voted to ballot for strike action despite Government commitments to address the issue of pay inequality.

TUI members voted to renew their mandate for a campaign of industrial action on the same morning that Mr McHugh acknowledged that resolving different pay rates for teachers who entered the profession before and after 2011 was “unfinished business”. Teachers will be balloted in September.

The TUI move is likely to ratchet up pressure on the Government to end two-tier payscales for teachers and other public servants.

Addressing the TUI conference in Killarney on Wednesday, Mr McHugh said teachers in Ireland and overseas had raised the issue of unequal pay rates and acknowledged that, with an ongoing teacher supply crisis, it was a barrier to many of them returning to Ireland.

“How it will happen is to be determined but we will follow through and bring it forward,” he said.

The Minister added he was keen to work with teachers on reform of the Leaving Cert. “If there are lessons to be learned from the Junior Cycle [reform process] - and I believe there are - then we need to learn from them. Reform needs to address rote learning as well as creative and critical thinking, and I believe we are all on the same page with that. But we are in the early stages of such a review, and there will be a lot of time for consultation with all stakeholders, including parents and students.”