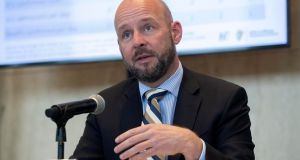 Public health officials have expressed concern about an increase in recent days in the level of transmission of Covid-19.

The reproduction number, which measures how many other people a confirmed case goes on to infect, for the disease has increased to “close to 1” according to one estimate, Prof Philip Nolan, chair of the Irish Epidemiological Modelling Advisory Group, has said.

A reproduction number of less than 1 means an epidemic is dying out; a figure greater than 1 signals it is spreading.

Prof Nolan said the rise in the State’s R number – which currently stands at between 0.6 and close to 1 according to various methods of calculation – was a “cause for concern”, though it was hard to calculate the measure accurately due to the small number of cases involved.

Prof Nolan said the levels of the disease were low in the population and in hospitals and ICUs, though there had been a slight increase in cases over the last five days.

However, such increases had occurred before and this one could be transient, he cautioned.

Another five people diagnosed with Covid-19 have died, the National Public Health Emergency Team (Nphet) reported on Thursday. This brings to 1,738 the total number of deaths related to the disease in the Republic.

Nphet also reported a further 15 new cases of the disease, bringing the total number of confirmed cases here to 25,489.

In Northern Ireland, there was one more death from the disease reported on Thursday, bringing the total death toll there to 552. The number of confirmed infections had risen by seven to 5,768, the North’s Department of Health said on Thursday.

Air bridges could be established allowing travel between the Republic and specific countries with a low and falling incidence of Covid-19, where this incidence could be verified as lower than Ireland’s, chief medical officer Dr Tony Holohan indicated.

However, public health officials still had concerns about overseas travel and were recommending a cautious approach to any easing of restrictions in this regard, he said.

Asked about pubs who were reportedly breaching the spirit of guidelines for their reopening by selling “30 pints and chicken wings”, Dr Holohan urged people to avoid overcrowded environments and places that were failing to protect their customers from infection.

The public health guidance for schools returning in the autumn was unlikely to change fundamentally before then, public officials said on Thursday.

People should plan for the reopening of schools on the basis of the infection control guidelines published this week, which allowed for some relaxation of the 2m social distancing rule in younger primary classes, deputy chief medical officer Dr Ronan Glynn said.

If possible, guidelines could be further relaxed over time, but “there’s nothing to say we won’t go in the other direction” if the situation with Covid-19 worsened, he said.

Some patients seriously affected by Covid-19 had lost up to 18kg in weight during their prolonged illness and needed considerable help to build up their strength again, Dr Vida Hamilton, HSE national clinical adviser, said.

Others have suffered impacts to their emotional status, including depressive disorders, flashbacks and problems with memory loss and concentration, she said.

Meanwhile, Minister for Health Stephen Donnelly said he would like the 2m physical distancing guidance halved to 1m as soon as possible to allow the HSE provide more healthcare services.

The newly appointed Fianna Fáil Minister said he had looked this week at how the existing 2m guidance would reduce capacity in the health service and that the impact of the restriction in this regard was “very, very sobering”.

“I would like us to be able to move in terms of health provision to 1m as quickly as possible within the constraints of the public health advice, because it has a very serious impact on healthcare provision,” Mr Donnelly told The Irish Times.

Eighteen patients with Covid-19 are currently in hospital, including 10 in ICU, officials said.

Some 92.8 per cent of people diagnosed with the disease who have died had an underlying condition.

The number of tests for the disease carried out is increasing and 19 per cent of cases were travel-related over the past four weeks; half of these were acquired internationally and half involved people affected by those who had travelled who tested positive.

Chairman of Fáilte Ireland resigns after it emerged he is holidaying in Italy 13:45
Urgent report on Dublin eviction ordered by Deputy Garda Commissioner 12:32
Man arrested in Kilkenny for possession of explosives 11:48
Investigation under way after body found in Dublin house fire 10:45
Cousins went paddle boarding at Furbo as usual location was cut off due to Covid-19 10:27

1 Chairman of Fáilte Ireland resigns after it emerged he is holidaying in Italy
2 Urgent report on Dublin eviction ordered by Deputy Garda Commissioner
3 A million trees, including 400,000 oaks, to be destroyed this week
4 Cousins went paddle boarding at Furbo as usual location was cut off due to Covid-19
5 ‘It was pitch black’ - Rescued teenager describes night afloat with her cousin in Galway Bay
Real news has value SUBSCRIBE