Machine used for stroke victims has broken down during treatment 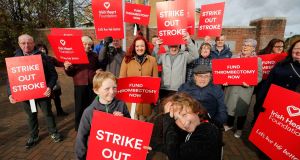 The Irish Heart Foundation and stroke survivors have protested outside Dublin’s Beaumont Hospital on World Stroke Day over what they describe as “an imminent threat” to the national service delivering thrombectomy, the most effective lifesaving treatment for stroke.

The IHF says the Health Service Executive has failed to fund a replacement of the machine in Beaumont used for most thrombectomies, despite calls from doctors in the hospital and its own National Stroke Programme.

The machine has broken down several times - on several occasions, as stroke patients were being treated - and is now so old spare parts will cease to be made for it from the end of 2019, it says.

The HSE referred queries about the service to Beaumont Hospital. A spokeswoman for the hospital said it submitted a capital expenditure plan in 2017 to replace the existing equipment and for a new room.

“This is currently under discussion with the HSE,” she said.

Thrombectomy involves a tube being inserted into the artery in the groin which is passed through blood vessels to the brain guided by an x-ray. It then sucks up the clot that has caused the stroke and restores the blood supply to the brain.

The technique reduces stroke deaths by half and the rate of permanent severe disability among stroke patients by almost as much.

Last year, 248 thrombectomies were carried out in Beaumont on patients from all over Ireland and a further 31 in Cork University Hospital, the only other provider of the service nationally.

“It is staggering that highly skilled consultants providing the most innovative and effective treatment devised for stroke have to work with equipment that is essentially obsolete,” said Chris Macey, head of advocacy with the IHF, speaking at the protest. “When the unit enabling the treatment breaks down they have to switch it off and on again, which takes up to 10 minutes. How can this be acceptable in the delivery of life or death treatment of patients for whom every second counts?”

Mr Macey said there was a real danger the unit will break down for a protracted period of time, or even permanently. “In that event it’s estimated it would take up to 10 months to replace the unit which would inevitably result in significant and wholly preventable loss of life, whilst many more patients would be robbed of the opportunity to recover from their stroke.

“Nobody has died yet, but this has been described to us as an accident waiting to happen.”

A recent Health Information and Quality Authority report recommended expanding the service through the provision of a second unit at Beaumont after deeming the treatment to be cost effective, he pointed out.

The cost of replacing the unit, which is eight years old, is €1.5 million plus building costs. The same amount, along with additional staffing costs, would be required to provide the recommended second unit.

The IHF has written to Minister for Health Simon Harris in recent weeks and has called for him to intervene “without delay”.

The HSE said later the expansion of the thrombectomy service was being considered for inclusion in the 2018 service plan, which is not yet finalised.