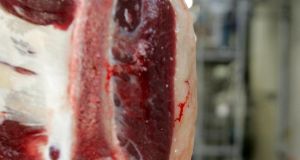 The absence of sick pay has been blamed for contributing to the high number of coronavirus infections within meat plants.

The Covid-19 pandemic has exposed inadequate health protections for meat factory workers with 90 per cent of companies failing to offer sick pay to ill workers, a survey has found.

The report from the Migrant Rights Centre Ireland, surveying 151 workers, found the nature of the work within the meat processing sector is “dirty, difficult and dangerous” and that “poor health and safety practices show a cavalier disregard for the people who work there”.

“Excessive levels of production for available capacity put undue pressure on workers to process and package meat at unsustainable rates,” says the report entitled Working to the Bone: The Experiences of Migrant Workers in the Meat Sector in Ireland.

The absence of sick pay has been blamed for contributing to the high number of coronavirus infections within meat plants where a surge in cases led to county lockdowns during the summer.

The survey heard from meat plant workers, who were mostly foreign workers from 21 different countries working in 13 counties. Migrants account for 59 per cent of the sector’s workers.

Some 28 per cent of workers on the lowest salaries, earning €12 per hour or less, have been working for between four and 15 years in the industry, while 27 per cent are not paid for overtime.

The survey found that 43 per cent have felt verbally bullied and 35 per cent psychologically bullied, while 96 per cent said that their employers did not take effective action.

The latest official Covid-19 statistics show that almost 1,800 meat plant workers – more than one-tenth of people working in the sector – were infected by the virus across 55 outbreaks.

Some 38 meat plant workers were hospitalised and 11 ended up in intensive care units.

The report quotes one worker who was off sick with Covid-19 for 15 days and said he believed he caught the virus at work where almost half of the staff became sick.

“The production never stopped and the people left behind had to work twice as hard to maintain the output level. The company did not give us sick pay,” he said.

The worker said that the factory only put in measures a month after Covid hit and the company did not enforce them or provide information that the workers could understand.

Among measures sought by MRCI is for a mandatory two-week closure of plants with live outbreaks, more resources for workplace safety inspectors to carry out unannounced inspections and a wider remit for the planned food ombudsman to include conditions for workers.

Meat workers: ‘I was told to call the doctor but I don’t speak English’

Luiz and Marcos (not their real names) are Brazilians in their 60s who have been working in beef processing for almost a decade and more than 15 years respectively. One is paid €10.50 an hour; the other €12.50. Marcos says he has been paid the same since he started working there.

Marcos said he was among 35 staff who worked together at his beef processing factory and who started feeling sick this year. Ten later tested positive for Covid-19.

“I was sick on Monday, Tuesday and Wednesday and told my supervisor but I got no support. I walked home on my own on the Wednesday. I was told to call the doctor but I don’t speak English so I did not really know how to proceed,” he said.

Luiz said his factory did not provide any protection from Covid-19 initially but after some inspections perspex dividers were installed between workers. They were never given face masks.

Luiz said that he has to work as fast as the machinery that carries the carcasses on the production line and he is blamed if he cannot keep up and pieces of meat fall on the ground.

His supervisor mocked him over his age, suggesting he was “too old” to work there.