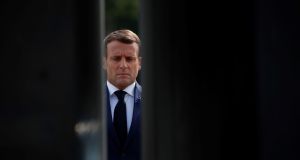 Emmanuel Macron: The Macron administration committed the “triple error” of destroying millions of masks that could have been used, and of failing to renew or increase stocks, according to investigative journalists Gérard Davet and Fabrice Lhomme. Photograph: Francois Mori/AFP/Getty

At the height of its pandemic preparedness, France deployed a veritable arsenal of vaccines, anti-viral drugs and 2.2 billion surgical face masks.

That was during the H1N1 flu scare at the end of 2009. Roselyne Bachelot, the health minister who oversaw preparations, was right, but a decade early. That epidemic fizzled out quickly, after killing ‘only’ 342 French people. Bachelot’s political career was destroyed and politicians became wary of overreacting to health disasters.

More than 26,000 French people have died in the Covid-19 pandemic. Commissions of inquiry are likely in both the Senate and National Assembly. Thirty-two lawsuits have already been filed against government officials or “persons unknown” for alleged responsibility in the devastation wreaked by the pandemic.

France was repeatedly warned this might happen, the investigative journalists Gérard Davet and Fabrice Lhomme wrote in a week-long series in Le Monde about the country’s strategy for confronting a pandemic.

In the wake of the 2003 Sars epidemic, which killed about 800 people in Asia, a report by the Inspectorate General of the Administration (IGA) warned of the likelihood of a new illness, more lethal than seasonal flu, for which there would be no vaccine. In old videos that have circulated during the pandemic, former president George W Bush and Microsoft founder Bill Gates made similar predictions.

Fifteen years ago, the IGA advised the French government to prepare stocks of masks “without delay”. The country should also stock anti-viral drugs and pre-position machines in textile factories to manufacture the highest quality FFP2 surgical face masks, the report said.

Philippe Douste-Blazy, a medical doctor, became health minister in 2004. Douste drew up a crisis plan in response to the H5N1 bird flu epidemic that included closing French borders, restricting movement, banning public gatherings and encouraging barrier gestures and the wearing of surgical masks. High quality FFP2 masks were to be reserved for medical personnel, ordinary masks for the general population.

All these measures were eventually, if belatedly, adopted by president Emmanuel Macron’s administration this year.

Face masks are most effective when worn by carriers of a virus. But as a French parliamentary report noted in May 2005, making masks available is “a way of reassuring the population” that can “help to limit paralysis of the country”.

Official French policy since January 2006 has been to encourage the wearing of masks during a pandemic. Infected persons are to wear surgical masks to protect their entourage. Medical personnel are to wear FFP2 masks to avoid catching the disease. And the general public are instructed to wear a disinfected surgical or fabric mask in public “as a precaution”.

In 2009, then health minister Bachelot, a doctor of pharmacology, dramatically stepped up the production of masks, put free kits containing anti-viral drugs and masks in pharmacies, and ordered enough vaccines to inoculate 42 million people against the H1N1 virus. Fewer than six million French people agreed to be vaccinated and the virus disappeared on its own.

Bachelot was accused of squandering €1 billion in public funds for what turned out to be a false alarm. The National Assembly, Senate and state auditor held inquiries into what was regarded as a wasteful vaccination campaign, the “principle of precaution” gone mad.

“When the shit hit the fan it was so violent,” Bachelot told Le Monde. “I found myself completely alone, without a single supporter . . . After what happened to me, politicians said it was riskier to do too much than too little.”

The High Council for Public Health (HCSP) confirmed in 2011 that face masks were still indispensable in combating a pandemic. But three documents, from the HCSP itself, Xavier Bertrand, Bachelot’s replacement as health minister, and finally the SGDSN, the defence secretariat which co-ordinates the emergency response to a pandemic, outlined a new doctrine.

The state was no longer responsible for stocking FFP2 masks for medical personnel. The task would be left instead to hospitals and nursing homes. But in the aftermath of the 2008 economic crisis, medical establishments were ordered to control their budgets. Hospitals and nursing homes were not about to engage in the time-consuming process of issuing bids for tender for large stocks of face masks they might never use. Procurement of all masks was allowed to fall into the proverbial administrative cracks.

Jérôme Salomon was appointed director general of health by Macron in 2018 and has become well known for his nightly televised update on the pandemic. When Salomon was special adviser to the health minister from 2013 until 2015, he was obsessed by the possibility of a pandemic. “We are all gonna die,” said a poster in his office.

Salomon wrote a memo to Macron in September 2016, soon after Macron left government to campaign for the presidency, predicting “a huge natural event” which would overwhelm the government’s capacity to react, with severe consequences for human life and the economy. Such an event “must be seriously envisaged and anticipated. France is not ready,” Salomon warned.

Yet the number of surgical masks in France has diminished six-fold since Macron took office, to just 117 million. About 600 million masks were destroyed because they had expired. Benoît Vallet, who preceded Salomon as director general of health, says he believes many of the masks could have been used regardless.

The Macron administration committed the “triple error” of destroying millions of masks that could have been used, and of failing to renew or increase stocks, Davet and Lhomme write.

After winning praise from the WHO in the 2000s as one of the world’s best-prepared countries, France has struggled in 2020 with shortages of intensive care beds, tests and protective equipment. The government response has often appeared slow and erratic.

Contributing factors were the absence of institutional memory, a lack of political courage and the undermining of the organisation which procured and stored emergency medical supplies.