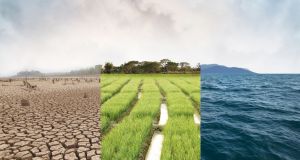 Greenpeace: ‘We are heading towards climate breakdown . . . the Irish Government still have their heads firmly in the sand.’ File photograph: Getty

Eight EU countries, but not Ireland, are to push for increased commitments on climate action at the “future of Europe” summit in Romania on Thursday.

Ireland has been criticised for not supporting a more ambitious plan that includes a proposal to dedicate 25 per cent of the bloc’s next seven-year budget to projects fighting climate change.

In a paper circulated in advance, the eight countries have proposed member states cut greenhouse gas emissions to a net-zero level by 2050. “As a general principle, the EU budget should not finance any policy detrimental to this objective,” it adds.

“The EU’s 2030 climate target required under the Paris Agreement, is seriously lacking ambition . . . I have consistently called for this target to be revised from 40 to at least 55 per cent emissions reductions.”

Responding to the leaked paper, Greenpeace EU climate policy adviser Sebastian Mang said: “We are heading towards climate breakdown . . . the Irish Government still have their heads firmly in the sand.”

The European Commission’s new climate strategy includes scenarios that reach net-zero emissions by 2050, estimating an additional €90 billion in investment per year in Europe would be needed to meet the target.

“The recent surge in public protests is forcing European leaders to finally recognise the urgency needed to combat the climate crisis,” said Wendel Trio, director of Climate Action Network Europe. “At the Sibiu summit, all European leaders need to follow the call from the most progressive governments and publicly commit to put climate action at the heart of future EU co-operation.”

How will the Dáil react today?

On Thursday a motion on the recent report of the climate action committee will be put before the Dáil. The Green Party have amended it to include a call on the parliament to declare a climate emergency and to act by endorsing the report.

“There is a real opportunity right now for the political system to recognise the scale of the challenge and commit to begin taking the steps needed to turn the ship around,” said Green Party leader Eamon Ryan.

“That change begins with accepting the reality that this is an emergency; while there is still denial in the Dáil and Government, Ireland won’t make the leap we know we have to,” he added.

The second step is to endorse the report and for the Government to commit to climate proofing the national development plan, he said. “The time is here to stop being laggards and start being leaders.”

A Government spokeswoman said “Ireland is determined to take ambitious action to deal with climate change and looks forward to engaging at Sibiu with the discussion paper tabled by a number of member states” ahead of formal engagement in June on the EU’s new strategic agenda.

The Government “does not underestimate the scale of the challenge and we are determined to face up to it. That work is already under way through the publication of the Oireachtas Joint Committee report on Climate Action,” she added.

“The Taoiseach has said it is his preference to achieve a cross-party consensus . . . to step up Ireland’s response to climate change and reduce emissions to ensure we meet our goals.”