School defends teachers’ use of playground as car park 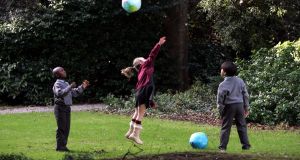 Records show the school says it swapped parking and play areas in 2007. Photograph: The Irish Times

A south Co Dublin primary school is at the centre of a planning dispute over the use of a former children’s playground as a staff car park.

Parents of children attending the Harold School in Glasthule, Co Dublin, have complained that the car park means there is not enough space for children at playtime.

Following complaints, Dún Laoghaire and Rathdown County Council issued a directive last April that the school’s use of an internal yard as an “unauthorised car park” should cease.

However, a planning consultant acting on behalf of the school has appealed the decision on the basis that planning permission was not required, according to planning records.

In a statement to The Irish Times, the school said: “There are a number of issues regarding the plans. The board of management is in ongoing contact with the Department, the patron, the county council and the parents’ association about these issues.”

The school was founded in 1899 and acquired the neighbouring Presentation Brothers’ School in 2007. At least 40 cars are parked in the school’s inner yard on any given day, according to the planning documents submitted by the school.

Records show the school says it swapped parking and play areas with the old Presentation Brothers School in 2007 to allow for “better supervision of play and better and safer access for vehicles, including emergency vehicles.” In addition, it says that there are two handball alleys on the school grounds and that there is access to playing fields nearby, which are owned by the council, for sporting activities.

Parents, however, say cars were never allowed on the school campus until parking meters were installed in the area in 2008.

“Since then, teachers have exclusively occupied the largest playground in the school and it has remained a carpark since,” said Leo Moore, a parents’ representative on the board of management, until recently.

Last April, the county council issued a directive that the use of the playground – or internal yard – as an unauthorised car park should cease.

At a meeting of the school’s board of management in May 2015, it decided to comply with the directive and requested an extension for use of the carpark until the end of the summer term.

School principal Anne Moore argued that the grounds were not being used as a car park as such, but for the parking of teachers’ and employees’ cars “during the times when the school is open”.

Parents have argued that the school fails to comply with the Department of Education’s minimum space guidelines for children.

The school’s correspondence with planning authorities, however, states there is adequate room given that only 12 of its 24 classes are allowed out at any time during the school day.