Winter is coming for Garda Commissioner

Relations between Government and Nóirín O’Sullivan have clearly broken down 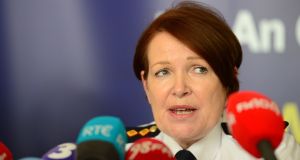 Garda Commissioner Nóirín O’Sullivan: if the Policing Authority’s consultants find anything nasty that the Garda reports overlooked, it could be the end of the road for her

One would assume at a certain point that, no matter how deep the recesses of the Garda cupboards are mined, there would be no more skeletons to be found.

But the situation for the national police force continues to worsen. Just like a magician’s hat, it seems anyone can reach in there and pull out just about anything.

It is also very clear that all relations between the Government and Garda Commissioner Nóirín O’Sullivan have broken down.

Minister for Justice Charlie Flanagan released a statement on Wednesday about the Garda’s reports into inflated breath tests and the fixed-charge notice system. He said he was disturbed by the findings and expected the reports to be published later in the day.

But Garda Headquarters never had any intention of publishing the reports any time soon. It wanted to wait until consultants hired by the Policing Authority to examine the same issues had completed their work.

But the Garda has now been forced to go public with the reports because Flanagan, in public, told Ms O’Sullivan she had to publish on Wednesday.

And if the Policing Authority’s consultants find anything nasty that the Garda reports overlook, it could be the end of the road for Ms O’Sullivan.

The Garda Commissioner’s situation could best be described by borrowing lines from a popular TV series Game of Thrones – “winter is coming” and it may be “dark and full of terrors”.

What emerges from the pages of Assistant Commissioner Michael O’Sullivan’s reports on inflated breath tests and the fixed-charge notice system is a breakdown in training and in communication.

There is no excuse, of course, for making up breath-test numbers. And those cases cannot be explained away by pleading a lack of training.

But it seems the Garda force does not do brevity. Every piece of material – from training manuals to directives from Garda headquarters – simply go on and on and on.

The guide for carrying out breath tests, for example, is hundreds of pages long. And even if members were minded to sit down and read and learn it, they would have a job getting their hands on a copy of the “difficult to locate” document.

When it came to Garda management explaining the offence of driving without an NCT certificate, the information was contained on page 14 of a 68-page document.

Mr O’Sullivan says these reports and directives are too long and too frequent. But in most cases they are the only training or guidance offered to gardaí.

If one were to examine the last five bulletins sent out to gardaí about police work, one would have to wade thought 697 pages.

The Garda portal, Mr O’Sullivan says, has largely assumed the training function in the Garda. It is clear the force has become one that assumes once a memo is sent to everyone then the job is done.

Ensuring Garda members read the information, have a chance to ask questions about it or, heaven forbid, that important procedures are embedded into the Garda culture seems to be absent. This includes important changes over time to the way the Garda should handle certain offences.

That the Garda is struggling to reach its members in an effective way is a real worry considering the power Garda members have.

And the report on the fixed-charge notices hammers home that point. It notes that for some offences attracting penalty points, if an initial fine sent in the postal system is not paid a summons is automatically generated and sent to the motorist.

But for a range of other offences the Garda member prosecuting the case must generate the summons themselves.

The only trouble is that most gardaí do not realise this. They simply don’t know that they must track some of their own cases, and that the computer won’t do it for them.

As a result, many motorists are not paying their fines. And when they don’t pay the legal system simply stops pursuing them.

We learned in March that almost 15,000 motorists had been wrongly convicted. Many of them paid their fines and were still summoned to court in error.

Others were never given the chance to pay their fines as they should have been under the law. Instead their cases went straight to the summons stage.

But now we learn that because of a lack of basic knowledge in the Garda, a large number of motorists who should have ended up in the courts never did.

What’s more, that problem is ongoing.

And the Garda has been unable to quantify the extent of the problem; a fact that is likely to lead to significant pressure from the media and within the political sphere for answers immediately.