Fees from Allen & Overy would have generated €545,900 for the Law Society last year 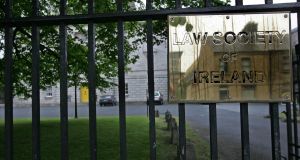 The law firm with the seventh-highest number of solicitors entitled to practice law in the Republic doesn’t have an office here, the latest figures show.

It ranked just behind William Fry and just ahead of Byrne Wallace in a list of the top 20 law firms ranked in terms of number of solicitors with an Irish practising certificate.

Solicitors from Allen & Overy, which had not featured in the top 20 list produced last year by the Law Society, took out 206 practising certificates last year.

There has been a sharp rise in the number of solicitors from England and Wales taking out certificates to practice here over recent years, driven by Brexit.

Most of the solicitors belong to substantial blue-chip firms, many of which also opened offices in Dublin as part of their preparations for the UK leaving the EU.

In May last year the Law Society issued a practice note that set out what having an Irish practising certificate entitled a solicitor to do.

The note did not express a view as to whether having such a certificate entitled a London-based lawyer to appear before the EU’s Court of Justice after the UK left the EU.

Neither did it express a view on another concern held by English solicitors who deal with EU law: whether their dealings on behalf of their clients, which are often multinational corporations dealing with complex, cross-border issues, are covered by legal professional privilege in Europe post-Brexit.

The UK has left the EU, and the transition period during which the former rules apply continues to the end of this year.

There was no reply to a request for a comment from Allen & Overy. It is understood that many London-based law firms believe a solicitor’s standing in Europe may be bolstered by having a practising certificate from the Law Society.

The Law Society is anxious that Irish practice certificates do not become a type of “flag of convenience” for non-EU lawyers wishing to practice law inside the EU.

In an article in the current issue of the Law Gazette, the director general of the Law Society, Ken Murphy, said it was budgeting on the basis that fewer solicitors based outside the Republic would take out Irish practising certificates during 2020.

The society’s guidance note, issued in May, “has clarified what an Irish practising certificate entitles the holder to do”, he said.