Minister says gang members in Drogheda all known to gardaí 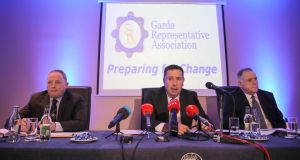 All of the gang members involved in worsening feuding in Drogheda, Co Louth, are known to gardaí and will face the consequences of their actions, Minister for Justice Charlie Flanagan has said.

Speaking in the aftermath of seven petrol bombs attacks and an attempted murder in which a man was wounded three times, Mr Flanagan insisted only a small number of criminals were involved.

“A specific dedicated operation now under way in Drogheda involves an armed support unit [ASU] and involves covert activity on the part of the gardaí as well as uniform checkpoints,” he said. “We are dealing with a small group, all of whom are known to the gardaí. Every effort will be made to bring this matter to an end.”

However, Garda members said because there was only one ASU in the Garda’s northern region, it was being deployed on patrolling the Border area in a bid to catch criminal gangs stealing ATMs just south of the Border.

And, the sources say, because that pressure was also being applied to the ASU, the same level of armed gardaí that might normally be deployed to Drogheda to quell the violence was not available.

The Garda Representative Association (GRA), which began its three-day annual delegate conference in Killarney, Co Kerry, on Monday, believes there are too few armed units nationwide. It says that Garda regions are such large areas, having one ASU for each region is unworkable, and leaves unarmed gardaí exposed to unnecessary risk.

It wants armed units in all 28 Garda divisions across the Republic, saying ASU members may need to travel more than 100km within the same Garda region to respond to an emergency.

The GRA, which represents rank and file Garda members, says while the ASU is travelling to the scene, unarmed unformed gardaí are left exposed to whatever emergency has arisen.

It points out that its members are often the first to encounter armed gangs carrying out a crime.

GRA president Jim Mulligan said the association was not calling for a significant change of ethos in the Republic that would see a move away from unarmed policing. Instead, it believes frontline gardaí should be equipped with stun guns and there should be a team of Garda members in each division that were trained to be able to form an armed response unit when required.

Such measures, he said, would modernise the Garda force, adding while detectives all over the State were armed, their firearms were for their own personal protection only.

He also believed if stun guns were issued to some frontline gardaí and more received tactical armed training to allow them be part of armed units, the overall number of firearms issued across the Garda could actually decrease.

“We want to see a more professional approach in the whole area of armed response,” he said.

Mr Mulligan said feuding in Drogheda and parts of Dublin necessitated an upskilling within the Garda. He said he was not suggesting armed and serious crime was so bad in the Republic that armed units were needed in all divisions, but the ability to deploy armed units in any division when the need arose needed to be improved.

Having just one armed unit in a region, that may take hours to reach a flashpoint situation, was not good enough, he said.

“In the northern region, the armed unit could be in Buncrana and something could happen in Louth. That would be a huge distance to cover.”

Criminal behaviour was evolving and the Garda had to respond by ensuring an armed response was never far away when frontline gardaí needed back-up, Mr Mulligan said.