Judges to vote on new guidelines to cut damages awards

Minister for Justice ready to make changes if proposals approved 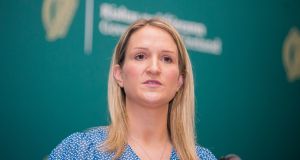 Minister for Justice Helen McEntee: said that if the new guidelines were approved, she would bring proposals to Cabinet on Tuesday on how to implement them. Photograph: Gareth Chaney/Collins

Judges are expected to vote on Saturday on whether to adopt proposed new guidelines to reduce general damages awards for some personal injuries, particularly minor injuries.

If approved by a majority of the 166-member Judicial Council, the guidelines are expected to be published shortly afterwards.

In a statement, Minister for Justice Helen McEntee said that, if approved, she would bring proposals to Cabinet on Tuesday on how to implement the Personal Injuries Guidelines, should they be adopted by the council. The changes will be made as soon as possible, officials said.

“The Minister intends that the new Personal Injuries Guidelines will apply to all cases that have not yet been assessed by the Personal Injuries Assessment Board, ” the Department of Justice said. “This approach will ensure that the law is robust as we seek to reduce the cost of insurance.”

The Minister’s intervention comes amid growing nervousness in Government about the outcome of the vote. Saturday morning’s meeting will go ahead after being twice adjourned after several judges said they had had insufficient time to consider the draft guidelines.

Since then, a number of judges, including the High Court’s Mr Justice Anthony Barr, the Court of Appeal’s Mr Justice Patrick McCarthy and Circuit Court judge Raymond Groarke have raised various issues and concerns about the guidelines.

A number of memos have been circulated raising concerns, including whether the guidelines will lead to awards which insufficiently compensate some plaintiffs, whether the committee engaged in adequate consultation with interested and affected parties and the implications of what some have described as “judge-made” law for judicial independence.

Those issues have been responded to by the council’s seven-member personal injuries guidelines committee (PIGC), which drafted the guidelines.

The committee, and the board of the council, comprising the presidents of all seven court divisions chaired by the Chief Justice, remain of the view the guidelines should be adopted.

The meeting comes just months before two senior judges hearing cases in the High Court personal injuries list are due to retire. They are Mr Justice Kevin Cross, who manages the list, and Ms Justice Bronagh O’Hanlon.

The Irish Times has learned the personal injuries list will, following Mr Justice Cross’s retirement in the autumn, be managed by Ms Justice Leonie Reynolds, who currently manages the court’s chancery list.

The guidelines are understood to propose that awards for many personal injuries, particularly minor injuries, be reduced to a level between awards in Northern Ireland and awards in England and Wales. Data obtained by the committee suggested Irish whiplash awards are 1.2 to 1.3 times higher than in Northern Ireland, and 1.9 to 2.3 times higher than their English and Welsh equivalents.

The guidelines also propose a modest increase in awards for the catastrophically injured with the maximum general damages for such injures to be increased from €500,000 to €550,000.

The focus of the guidelines is aimed at ensuring awards for lesser injuries should be considered in light of, and be proportionate to, that maximum.

The proposed award reductions would be achieved by cutting back on the scope for judicial discretion when making awards by setting tighter limits on awards for specific injuries.

Some judges are concerned about perceived interference in judicial independence, while there is also concern among District Court judges that cases previously heard in the Circuit Court will in future take place in the District Court, significantly increasing their workload.