Scene of fire at KBC bank preserved for examination 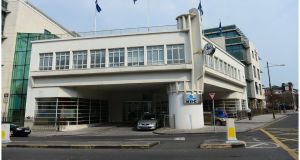 Gardai are investigating a fire at the KBC bank building in Dublin’s city centre on Thursday night.

The incident occurred at around 11.25pm at the premises on Sandwith Street. Dublin Fire Brigade attended the scene and extinguished the fire in the lobby of the building.

Gardai said windows were also damaged and they are investigating “an incident of criminal damage”.

The scene has been preserved for a technical examination. No arrests have been made and gardai said they appealing for witnesses or anyone with information to contact them.

Gardaí have cordoned off the front entrance of KBC Bank on Sandwith street following an incident of criminal damage by fire last night.

Dublin Fire Brigade attended the scene and put out a fire in the lobby of the building. pic.twitter.com/gVxdRWS0IH

A KBC spokesman said on Friday morning: “As this matter is the subject of a criminal investigation by An Garda Siochana we are not in a position to provide comment at this time.”

The Belgian-owned bank has been at the centre of controversy over the recent eviction of a farming family in Co Roscommon.

A group of masked men confronted a private security firm on Sunday morning in which three security guards were seriously injured, four vehicles set alight and a dog subsequently put down.

A number of investigations are under way into both the attack and the eviction itself, which was carried out by a group of men believed to be from Northern Ireland.

Separately, Independent TDs Mattie McGrath, Michael Collins and Carol Nolan and members of the Land League attended a sit-in protest at the KBC branch on Baggot Street earlier this week.

Mr McGrath said the protest was to highlight “the appalling treatment that customers in distress are receiving at the hands of KBC Bank”.

KBC representatives have agreed a meeting with the three Independent TDs in January.