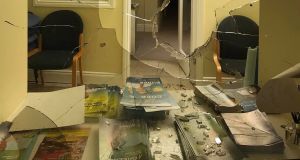 The photograph of the smashed window in his constituency office posted on Twitter by Senator Colm Burke. Photograph: Colm Burke/Twitter

Senator Colm Burke had a brick thrown through the window of his constituency office in Cork on Sunday evening, the politician has said.

The Fine Gael general election candidate for the Cork North-Central constituency says he returned to his office in Blackpool on Sunday night to find two window panes had been smashed with a brick.

He added that the incident has come after hundreds of his election posters were removed without his permission.

In a post on Twitter, the senator said: “Bricks fired through the window in my office in Blackpool this evening. It has been a difficult few days with over 250 posters taken down and illegally removed.”

Mr Burke added that despite the vandalism, he would continue in his campaign for election.

“No candidate or their staff should have to face this, but my campaign and I won’t be intimidated or deterred,” he said.

Mr Burke is the party’s Seanad spokesman on health and was a member of the European Parliament for the Ireland South constituency between 2007 and 2009.