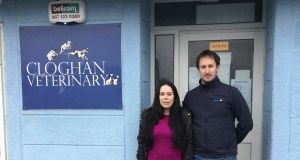 Elizabeth McLoughlin and Ollie Keane outside their veterinary clinic in Cloghan, Co Offaly: were robbed twice in five weeks in December 2016 and January 2017.

Elizabeth McLoughlin and her partner Ollie Keane suffered two burglaries at their veterinary clinic in Cloghan, Co Offaly, in the space of just five weeks last December and January.

The first robbery cost them about €5,000 in damage and stolen stock; the second one about €4,500. On both occasions, CCTV footage captured the perpetrators in the act.

On the first occasion, the burglary was professionally done; they “popped” open the door in five seconds and were in and out quickly after searching for cash. The second time was “really, really messy”. Surveillance video showed the thieves targeting the house next door and then returning to the clinic.

“It was five males the second time,” said McLoughlin. “We had a clear CCTV image of them. They even turned on all the lights in the clinic.”

Frustrated, she posted the video footage of the thieves on Facebook seeking information and even though 30 comments were posted, each identifying the same man out of the five, nobody has been arrested or charged. She was even warned that she could be sued for posting the image of one of them online.

“They came in and destroyed our clinic and caused so much damage and they can sue us. It is just madness,” she said. “Five weeks after the first one, I was so angry. It is soul-destroying.”

The targeting of the couple’s clinic is among the many recent instances of larceny and violent incidents in rural areas which have alarmed rural communities. Crime statistics show that burglaries have declined sharply in the past few years but this is cold comfort to those who have suffered loss or injury.

Beaten with a bar

Eight days ago, Co Offaly farmer Richie McKelvey was beaten and robbed by a gang of four men on his farm near Birr. It was the second time in six weeks that the man had been robbed. The 54 year old suffered facial injuries when he was beaten with a bar and locked in a shed during the ordeal.

“I am terrified of our house being burgled and have been ever since the clinic was burgled,” said Elizabeth McLoughlin. “I would never have batted an eyelid before but there have been so many burglaries since then. Every day the phone is going off with a burglary around or suspicious activity.”

Locals feel that the absence of a Garda presence in rural Ireland and the closure of rural Garda stations have drawn criminal gangs into the midlands, forcing local people to police their own areas with community alert texts. The fear is even more intense for elderly people or couples in remote areas.

“I am only 31,” said McLoughlin. “I cannot imagine what it is like for older people on their own. One older person said to me: ‘It is grand for you – you can run.’”

Local politicians are concerned that anxiety could escalate an already bad situation if someone overreacts at the sight of an unfamiliar car pulling into a farmyard or a knock on the door at night.

“I know for a fact that farmers in my constituency are now carrying shotguns and talking about carrying shotguns,” said Offaly County Councillor John Leahy, leader of Renua Ireland. “We are not far off the situation where people are going to be taking the law into their own hands. They are fearful of their own possessions and their lives. This is the level and intensity that these criminals are bringing now.”

Operation Thor, the Government initiative launched two years ago to tackle rural crime, helped at first, says Leahy, but in the past six months he has seen an increasing number of thefts and aggravated burglaries in his area and a new scale of destruction with homes and outhouses being ransacked.

He describes the M4/M6 motorway through the midlands as “a runway” for criminal gangs and while CCTV cameras on the road networks will help, the gangs can change number plates, making it difficult to monitor and track them. In her home village of Cloghan, McLoughlin points out that there are three routes to the motorway providing easy access and escape routes for criminal gangs.

Fear in Carol Nolan’s locality was so great that the Sinn Féin TD for Offaly and Tipperary North heard callers to a local radio station last week talking about bringing loaded shotguns to bed at night.

More Garda visibility and more community policing is what is required, she says.

“There is a lot of fear and going with that fear is a greater sense of frustration and anger. People feel that they are not being protected or listened to. The only way to deal with this is a stronger Garda presence in our communities,” she said.

Nolan believes that low morale among rank-and-file gardaí is not helping matters as, short on manpower and resources with station closures, they are being asked to cover larger areas.

“They are being dragged across a wide area which is leaving small, rural communities vulnerable to criminal gangs and the gangs are aware of that,” she said.

What we are encouraging is for farmers to go to your neighbours, give them your number and put their number on speed dial

Central Statistics Office data showed that the number of burglaries declined by almost 30 per cent to 18,438 in 2016, but the figures may not provide a full picture.

A survey published by the Irish Cattle and Sheep Farmers’ Association last week found that 45 per cent of people did not report instances of agricultural crime to the Garda. Among the reasons cited by respondents in the report, compiled by Waterford Institute of Technology lecturers, was that no action had been taken by the Garda on previous thefts, the Garda station was closed at the time of the incident or that there was no local garda with knowledge of the area.

Seamus Sherlock, rural development chairman of the association, said that for “a nation of elderly farmers”, community support was required.

“The Garda cannot sit outside everyone’s house,” he said. “What we are encouraging is for farmers to go to your neighbours, give them your number and put their number on speed dial. Farmers are sleeping better in bed because Johnny down the road has your number.”

At a higher level, the Garda is upping its game to crack down on burglaries over the winter months. A crime taskforce has been set up in Laois-Offaly and Assistant Commissioner John O’Driscoll has called for more intelligence gathering on roaming gangs committing burglaries and using the motorway network.

“I am really keen to ensure that communities are safe but feel safe,” said Minister for Justice Charlie Flanagan, pointing to a series of arrests last week as part of Operation Thor.

“That proves that gardaí are targeting criminals who continue to prey on householders in rural areas. My warning is that the net is closing in on the roaming crime gangs.”

He listed a number of measures being taken to improve policing in rural areas: 800 new Garda recruits next year and a net increase of 500 on an annual basis with the aim of reaching 21,000 members by 2021; some 720 new Garda vehicles over the past two years; €3 million spending on CCTV cameras; and an initiative to work with mobile phone companies on text alerts in rural areas.

Flanagan said the Garda Armed Response Unit planned to have regular, random checkpoints and would operate “where the Garda believe the roaming criminals are likely to strike”.

“Rural crime requires a mobility on the part of the Garda and mobile gardaí, random checkpoints and armed checkpoints, to my mind, comprise smarter policing than bricks and mortar,” he added.

For people in rural Ireland, the proof will be in the level of visibility over the coming months.