Causal link between vaccine and narcolepsy not made by study, court told

Young woman alleges she developed condition after being administered Pandemrix 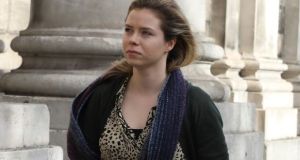 Aoife Bennett from Naas, Co Kildare, at the Four Courts last Friday, where she is taking a High Court action against the Minister for Health, the HSE, GlaxoSmithKline Biologicals SA and the HPRA. Photograph: Collins Courts

The claim being taken by a young woman who alleges she developed narcolepsy after being administered a swine flu vaccine is based on a “multiplicity of misplaced contentions”, counsel for the product’s manufacturer has said.

In an opening address on behalf of pharmaceutical group Glaxosmithkline (GSK), Douglas Clarke SC said 10 years of study had not produced a causal link between the vaccine and the condition of narcolepsy.

Aoife Bennett (26), of Naas, Co Kildare, claims she developed narcolepsy and cataplexy disorder as a result of being given the Pandemrix vaccine in school in December 2009. The vaccine was administered in the context of global pandemic scare.

Counsel for the plaintiff, Dermot Gleeson SC, made a lengthy opening address last week and lawyers representing the defendants addressed the court on Tuesday.

Ms Bennett is suing the Minister for Health, the HSE, GSK Biologicals SA, and the Health Products Regulatory Authority (HPRA), which has responsibility for authorising and monintoring medicines.

At the outset of his address, Mr Clarke sympathised with Ms Bennett and said nothing he would say should be taken as a criticism of her.

The disputed allegations being made included the claim that GSK had produced a defective product and then supplied it while “suppressing the truth”.

Pandemrix was designed, manufactured and supplied in “emergency circumstances”, there being the first flu pandemic of the 21st century, where each of the three pandemics of the 20th century had caused millions of deaths.

When, after the product began to be administered, reports began to come in of a possible link with narcolepsy, GSK began to study the matter and the studies continue to this day.

Based on the information available at the time, “it was not possible for GSK to foresee that the vaccine could cause narcolepsy”.

Mr Clarke said he would come back to that point, and it should not be taken as a concession that his client accepted that the administration of the vaccine caused Ms Bennett to develop narcolepsy.

The court heard the vaccine was approved by the European Commission, acting on the advice of the European Medicines Agency (EMA), on September 29th, 2009. It was agreed that the administration of the vaccine would be monitored for signs of adverse effects.

On December 9th, 2009, the day before Ms Bennett received the vaccine, an update on the EMA website said there had been no change in the risk balance profile and that no serious safety issues had been identified, Mr Clarke said.

Rossa Fanning SC, for the HPRA, said he wanted to acknowledge his profound sympathy for Ms Bennett. However the case against his client was bound to fail. It was the EMA, and not the Irish Medicines Board (now part of the HPRA), which had authorised the vaccine.

It had been suggested that the HPRA had been “asleep at the wheel” or had been the “watchdog that didn’t bark”, but this was “a complete fiction”.

The first report of narcolepsy having any possible connection with the vaccine did not come to the attention of his client until August 31st, 2010.

“No one could have had any basis for warning,” Ms Bennett of a risk of narcolepsy in December 2009, when she received the vaccine.

This was a test case but Mr Gleeson, in outlining the plaintiff’s case, had not referred to any other person getting damages in any other jurisdiction, in the wake of a trial involving a similar claim, Mr Fanning said.

Mr Gleeson is to address the judge again on Wednesday afternoon and it is expected that Ms Bennett will begin to give evidence on Thursday.