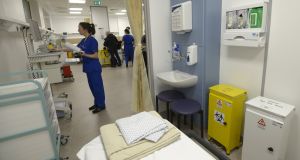 During the procedure at the Mater Private, when the operation set of instruments had been opened, it had been discovered that an irrigation extender was missing. File image: Brenda Fitzsimons / The Irish Times

A judge has accepted that Dublin’s Mater Private Hospital displayed medical negligence after a man put under anaesthetic for an operation never had his procedure carried out due to the disappearance of a critical piece of medical equipment.

Judge John O’ Connor, sitting in the Circuit Civil court today Friday, heard that Peter Keegan (31) of Woodbine Park, Raheny, Dublin 5, had been due to undergo an operation on his right hip on November 25th 2016, in the Mater Private Hospital, Eccles St, Dublin 7.

Barrister Conor Kearney, counsel for Mr Keegan, told the court his client had been admitted to the hospital’s short stay procedure unit at 6.45am on the morning in question.

Mr Kearney, who appeared with Mark Tiernan, of Tiernan & Company solicitors, said his client had received his anaesthetic at 7.30am. He said that during the procedure, when the operation set of instruments had been opened, it had been discovered that an irrigation extender was missing.

Counsel said that it had been realised the missing piece of equipment had been sent for repair one month earlier and had never been replaced.

Mr Keegan told Judge O’ Connor that when he had woken up from the anaesthetic at 8.30am, a number of nurses had rushed over to tell him there had been an issue with his operation.

He said he had initially become very panicked as he had not understood what had gone wrong until the nurses had explained.

Mr Keegan said that when he had been discharged a few hours later he had felt very sleepy. He said he had suffered with stomach pain and nausea in the days following.

He told the court that the hospital had rescheduled his procedure for ten days later on December 5th. He said he had been worried leading up to the new operation and had felt very anxious about taking the anaesthetic again.

Judge O’ Connor said the incident had been unfortunate and that he accepted there had been medical negligence on behalf of the Mater Private Hospital.

He said Mr Keegan had been upset emotionally after the incident but that he had been fortunate his situation had no long-term effects.

1 Bobby Storey: The IRA's planner and enforcer who stayed in the shadows
2 Coronavirus claims one more life while 11 new cases reported in Republic
3 Gardaí seek help in finding missing Roscommon toddler
4 Rare whale dies after getting into distress in Wicklow Harbour
5 Covid-19: Travel restrictions to stay and 'green list' put on hold amid fears of second wave
Real news has value SUBSCRIBE