Oireachtas joint committee hears that some 65,000 Falun Gong practitioners have been murdered to facilitate organ transplant 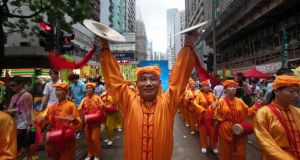 Members of the outlawed Falun Gong organisation play instruments during a rally in Hong Kong. Ireland has been urged tolobby the European Union to confront the Chinese authorities more trenchantly over the forced removal of organs Photograph: Daniel J Groshong/Bloomberg

An estimated 8,000 prisoners of conscience in China have their organs removed forcibly every year to supply a burgeoning transplant market operated by the Chinese military, an Oireachtas joint committee heard yesterday.

Not all of them die but since 2001, some 65,000 Falun Gong practitioners have been murdered to facilitate organ transplant, it was claimed.

The assertions came from David Matas, a Canada-based international human rights lawyer, and Ethan Gutmann, a London-based American journalist who has specialised in investigating unethical organ harvesting in China.

Giving evidence yesterday to the Joint Committee on Foreign Affairs and Trade, they urged Ireland to lobby the European Union to confront the Chinese authorities more trenchantly over the forced removal of organs, both from prisoners sentenced to death and prisoners of conscience, such as Falun Gong, and to enact legislation here to ban organ transplant tourism, as Israel has done.

“It hasn’t stopped the killing [in China],” said Mr Matas, “but it has stopped complicity and it sends a message.”

Mr Gutmann, who has been examining unethical organ harvesting in China for seven years, said there was “no legal way” for practitioners of Falun Gong to be executed. “But it’s a bit like the Inquisition,” he said, “they just disappear.”

Falun Gong is a spiritual discipline based on meditation and is opposed vigorously by the Communist authorities in China.

Mr Gutmann said evidence existed that in some instances, firing squads sought only to wound their victims so organs could be extracted from living tissue. In such cases, the removal of organs was the cause of death rather than execution.

Senator David Norris, who sponsored a motion urging the Government to use international forums to oppose forced organ harvesting in China, said what was happening was “a massive crime against humanity and mass murder”.

He decried a Department of Foreign Affairs briefing paper on the subject which he said saw the issue in terms of trade and referred to “the autonomous region of Tibet”.

His motion was passed unanimously and without a vote.

Bank branch closures, Dublin gains from Brexit, and independent living options 06:30
Investor seeks winding up of Irish firm linked to German property venture 06:00
Jack Conan makes an impact as he returns in Rome 06:00
Bars still generating revenue despite lockdown, but from what? 05:32
TikTok sets up European council to advise on content moderation policies 04:56