Six-bedroom Ballsbridge house extends to 3,229sq ft along with a generous rear garden 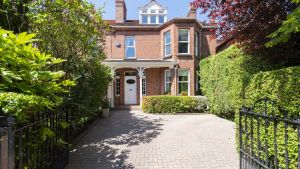 “An honourable comrade and a true and distinguished sportsman” reads the epitaph of Francis Henry Browning, the first resident of 17 Herbert Park in Dublin’s affluent district of Ballsbridge.

An accomplished cricket player, the right-handed batsman and wicket keeper is said to have made 2,000 runs in the game in 1889. In addition to his cricketing prowess, Browning was also an accomplished rugby player having been capped 38 times for Ireland and went on to become president of the Irish Rugby Football Union (IRFU) from 1913 to 1916.

His tenure as president of the IRFU was cut short when, at the age of 47, Browning – who was a barrister – was killed during the 1916 Easter Rising while returning from a route march with the first battalion of the Associated Volunteer Training Corps, of which he was a sub-commandant. He thus became the only first-class cricketer to die in the Easter Rising. A further inscription erected by the IRFU on his tombstone reads: “He will live in the memory of all as an honourable comrade and distinguished sportsperson.”

His former home, a large six-bedroom Edwardian semi-detached property extending to a very generous 300sq m (3,229sq ft) has been home to the current owner since 1991.

“Although you can drive in and out to the house, sometimes this means that you don’t know your neighbours. This was never the case here as it is all families along the road so there is a great sense of community. Today the houses are changing hands but it is new families who are moving in so there is still a great sense of neighbourliness,” says the owner who is downsizing due to an empty nest.

The location on Dublin’s embassy belt – just a stroll from Herbert Park, providing 32 acres of public recreational space with a playground, all-weather multi-use pitch, tennis courts and duck pond – speaks for itself and family homes in the area are always in demand.

The property was last upgraded in 1996 so new owners will want to update parts of this handsome Edwardian property.

The fact that it has six double bedrooms will attract larger families but, given the current health crisis, there is ample room to use some of these rooms as home offices or indeed as quiet rooms for children to be educated online.

The gardens are one of the real selling points – along with the location, size and elegant period details.

To the front, high beech hedging allows privacy from passing traffic, and the rear space which is flanked by stone walls benefits from sunshine all day.

There is also an inner-courtyard set between the dining room and kitchen and pedestrian access from Orchard Lane allows for easy access for garden maintenance.

For rugby and cricket fans, the location is within a short stroll to the Aviva stadium and Merrion Cricket Club, as well as an abundance of private schools.