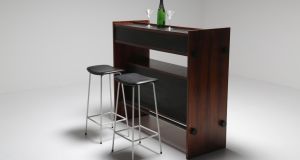 Mid-century furniture may not yet be technically “antique” but in the collecting world it has certainly come of age. According to members of the Irish Antique Dealers Association, furniture from the late 1920s to the mid-1970s is getting a whole new lease of life as young (and not-so-young) professionals seek out original pieces for their homes.

“People want to express themselves by buying something different,” says Will Walsh of the Vintage Hub in Lusk, Co Dublin, Ireland’s largest warehouse of vintage, mid-century, and retro furniture. “They see mid-century pieces in films, and in architecture and interior design magazines, and they become less attracted by chain-store style.”

Walsh says there has always been a market for mid-20th century furniture in Britain and the US, but it is only in the last two to five years that the trend has really taken off in Ireland. It’s partly, he says, due to a recognition that quality and originality is somewhat lacking in a lot of modern furniture, “whereas mid-century pieces are made using superb design and production values”.

And then there is the glamour of it all. High-gloss retro telly dramas such as Mad Men have played an unexpected role in creating an appetite for high-quality modern pieces. In consultation with the iconic US furniture manufacturer Herman Miller, the show’s sets were specifically designed to reflect US 1960s interiors.

“The Mad Men cocktail vibe is big news at the moment,  with cocktail bars, trolleys and cabinets flying out as quickly as we can get them,” Walsh says.

Among the choice pieces in the Vintage Hub collection is a Danish rosewood drinks bar from the late 1960s or early 1970s (€2,500) with a chrome footrest and glass shelving at the back for mixing cocktails. The piece is available with two Kandya stools designed by Frank Guille (€225 each).

For relaxing with cocktail in hand, Walsh suggests a buttoned leather armchair and ottoman by Milo Baughman (€1,800). Or, if you prefer to stay upright, the very striking chair which he describes as “Cotswold modern” (€1,800). A vintage take on a Sussex chair, it has some arts and crafts features along with shaker or Danish style elements. “There are lovely features like the shape of the arms and the lovely thin wood turned elements,” he says.

Niall Mullen is another IADA member who has picked up on the popularity of all things mid-century and cocktail.  A striking art deco drinks trolley from the late 1920s (€7,500) features among his collection at Niall Mullen Antiques on Dublin’s Francis Street.

“It is a fabulous one-off piece in walnut and chrome with receptacles for drinks bottles and glasses,” Mullen says. Designed for the good-time folk of the roaring 1920s, the cocktail trolley rotates at the touch of a foot pedal – and would, needless to say, look just as good loaded up with Irish craft gins.

A long, sleek Hamilton sideboard in rosewood epitomises the look. Made circa 1960 by the designer Robert Heritage, it has four ribbed drawers, two generous cupboards and those all-important angled legs (€3,500).

For sheer luxury, however, it’s hard to beat a statement mid-century sofa.  “These beautiful pieces have stood the test of time, and look fantastic in a modern setting,” McNulty says.

A chrome-framed sofa covered in teal velvet from the Caroline Seating Company 1972 (€4,950) is another favourite. “It looks as good from the back as from the front,” McNulty says. “It is 360 degrees worth of design – which means it really works in modern, open-plan homes, where the back of furniture is more often on show.”

Another of his design choices is a slightly curved sofa, circa 1960, by the American designer Paul Cobb. It comes in a walnut frame and is covered in period-style yellow tweed (€9,995).

“Very few of these designs made it to Ireland unless people brought them with them when moving from the US,” says McNulty .

Niall Mullen Antiques, the Vintage Hub and Mid-Century Online will be showing  a selection of mid-century furniture at Timeless, Irish Antique Dealers Fair at the RDS, Dublin, from Friday, September 28th, to Sunday, September 30th. Some 30 of Ireland’s leading antique dealers will be present, exhibiting a wide range of rare and beautiful objects. There will also be a series of free guest lectures from some of the world’s leading experts in their fields. iada.ie