My stillborn daughter: giving birth was horrific, but staff saved us from despair

The NHS way: a woman writes of her experience in England the day her unborn baby stopped moving 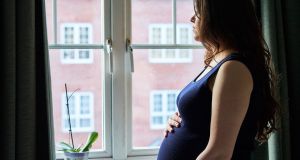 One night when I was expecting my first child, I woke up with a start.

I was due to give birth any day and it was obvious to me that my baby had stopped moving. At midnight, my husband and I dashed to triage where we were seen by a friendly but unconcerned midwife.

She nonchalantly pulled out a Doppler and placed it on my stomach to listen to the baby’s heartbeat. There wasn’t one. She didn’t tell us that, but it was obvious by the silence. At my last checkup two weeks before, the midwife had been able to find the heartbeat almost instantly.

A series of consultants were led to the room, each with increasing seniority. They took turns placing the doppler on different parts of my stomach to find the heartbeat.

Someone was found to operate the ultrasound machine so they could see the baby; my husband told me not to look. Eventually a consultant took my hand and told me she was sorry, the baby was gone.

The most senior consultant was called to verify that devastating news and from that moment a world of NHS services in England we never imagined existed enveloped around us.

I was in disbelief. My mind was searching through the details of the previous few days. Had I done something wrong? I asked if I still had to give birth; I’m not sure what I thought the alternative was.

It began to sink in when we were led to a private birthing suite as far away from the other rooms as possible. It was furnished with everything you would expect: a hospital bed, endless electrical sockets and enormous hospital lamps, but also a double bed, so that my husband and I would never need to be separated. We were given time, the opportunity to go home, to call family, to process what we had just been told. We declined. I didn’t want time to dwell on the task ahead of me. They started to prepare us for one of the biggest ordeals any woman could face – birthing their stillborn child.

I was told I could do things my way – no pain relief was out of bounds. It was explained that in these circumstances the process was often quick and that we should consider how we might feel when our daughter was born. Might we like to hold her immediately? Did we have a little outfit for her, a special soft toy that we had brought in expectation of a happier outcome?

I wanted it over. I did not want to see my baby, let alone hold her.

Sadly, midwives are all too experienced in these circumstances and I was gently guided to reconsider. My daughter may not be alive, but she was still my daughter. Once the shock was over, I would need memories, something to cling on to while I was grieving for someone I desperately loved but had never met.

We were asked if we wanted to be alone during those early stages; I wanted someone with us. A midwife remained with me at all times, even when the emergency alarm sounded for someone elsewhere. Everybody told me it wasn’t my fault, that nothing could have been done, and that she didn’t suffer. They answered the questions I hadn’t even thought to ask yet.

When born, our daughter was placed in a crib wrapped in a blanket, and a small pink teddy was placed beside her, both knitted by volunteers. These were given to us after she was buried.

We treasure them; that was their purpose.

They were kind enough to take photos, cut a lock of our daughter’s hair, and take hand and footprints. It repulsed me at the time. But these are all we have left now, they are proof that our baby girl existed. Without the understanding and experience of the staff, we wouldn’t have them.

When we eventually left hospital, the NHS closed ever tighter around us. There was the bereavement midwife who helped us plan for the funeral and continued to ring almost a year after our daughter’s birth. Our community midwife took time out of her evening to sit with me and listen to me speak about the birth, which had been lengthy and traumatic. My GP was understanding and patient when I went to him with post-traumatic stress and refused medication, instead wanting to cope with exercise. It was a relief when he told me that taking control my way might be cathartic, when everyone else around me felt differently.

For us, the National Health Service went far deeper than the medical care we expected. It hit home when I was in triage expecting our second daughter. One of the midwives who had treated us before walked in.

She remembered us immediately: I could see she was choked, delighted that we were having another child.

That short exchange brought home how special the NHS is.