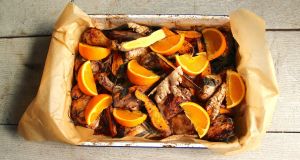 Apart from vegetarians and vegans, almost everyone seems to love chicken, whether you’re having it in a simple, thrown-together tray bake, or in a comforting pie.

The popularity of the humble chicken fillet roll is undeniable – chicken breast, crumbed and fried, served in a baguette is Ireland’s go-to snack, it seems. There’s that magical moment when the hot chicken combines with mayonnaise and hits the cos or iceberg lettuce, wilting it slightly.

The very best fried chicken sandwich I ever had was made by a Kiwi chef called Morgan, aka Morgy McGlone, who owns Belle’s Hot Chicken in Sydney and Melbourne. My pick in the northern hemisphere would have to be Andy Noonan’s at Fowl Play in Dublin 2.

I’m a thigh woman myself and don’t really understand people who won’t eat the meat with their hands. Dark meat is definitely tastier than its chesty counterpart, and hunting those delicious chicken oysters and parson’s noses out is all part of the fun of a well-roasted bird.

And then you have the poor, neglected chicken that has only been adorned with a little table salt and not even a dusting of white pepper, before being shoved in the oven. This makes me so uncomfortable, it’s the culinary equivalent of being clad head-to-toe in Spanx in a hot nightclub belting out German acid techno while dancing in wedges (no, not the potato variety).

We need to hold well-reared poultry in high esteem, and here in Ireland, there are some great free-range and organic chicken farmers and suppliers, such as Bertram and Celine Salter who rear free-range chickens on their family farm in Fenagh, Co Carlow. The guys at Magners Farm tweet feel-good videos of their girls running free in the pastures of Fethard, Co Tipperary, and the Friendly Farmer here in the west has been our only chicken supplier for Kai for the past nine years.

By buying local and free-range, your chicken won’t leave you feeling like you’re wearing restrictive shapewear in a Berlin discotheque, and that has to be a good thing. You will taste the difference, and it will be finger lickin’ worth it.

These little free-form filo pies are an oldie but a goodie, and the perfect way to use up left over roast chicken and ham.

The gochujang in the traybake is a bit like a spicy miso and one of the backbone ingredients of Korean cooking. You’ll be able to find it in the Asian supermarkets, but a paste made of red chilli pepper flakes and a little sugar, moistened with soy sauce, will give a similar flavour profile.

Method
Melt the butter in a small saucepan.
Once it has melted, stir in the flour and cook for 1-2 minutes.
Gradually add the milk, stirring all the time, until you have a thick, white sauce.
Mix in the ham and torn chicken, along with your grated smoked cheese.
Heat the oil in a frying pan and sauté the leeks until soft.
To this, add the spinach and allow it to wilt for a further minute or two.
Transfer the veg into the white sauce mix and season well.
Spoon the filling into four individual pie dishes or one large one.
Heat the oven to 170 degrees Celsius.
Lay a sheet of filo on a chopping board, and brush it liberally with melted butter. Scrunch it up and drape it on top of the pie mix.
Repeat with the other sheets, placing one on top of the other.
Bake for about 30 minutes or until the pastry is deep golden.

Method
Preheat an oven to 180 degrees Celsius.
Rub the chicken thighs all over generously with the gochujang paste.
Peel and roughly chop the sweet potatoes and toss in a baking tray with the sliced red onion, garlic, ginger and rosemary, a generous coating of olive oil and season well.
Add the chicken to the oven tray and cook for 40 minutes or until the juices run clear.
Cut the oranges into segments and use to garnish before serving.
Squeeze the juice over the hot spicy chicken.

Method
Give your spatchcock chicken a good coating of the sriracha, season and leave to
marinate for up to two days, refrigerated.
Preheat an oven to 180 degrees Celsius.
Put the chicken in an oven tray lined with parchment with all the citrus, lemongrass and oil.
Roast for 45 minutes, or until the chicken is brown all over and the juices run clear.
Remove from oven and let rest for 10 minutes before carving.

The Roscommon man who became a sumo wrestler in Japan
10