Panti Bliss has donated the dress she wore when delivering the ’Noble Call’ speech about prejudice and homophobia in Ireland, at the Abbey Theatre in 2014, to the National Museum of Ireland. Video: Bryan O’Brien / Archive clip: Rory O'Neill 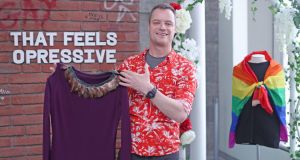 Panti Bliss, real name Rory O’Neill, pictured with the outfit worn by him when he made the ‘Noble Call’ speech as it goes on display in the National Museum of Ireland, Dublin. Photograph: Niall Carson/PA Wire

Rory O’Neill, also known as Panti Bliss, has described how advances in anti retroviral drugs to treat HIV meant he never felt “hopeless” despite the “death sentence” his diagnosis was in 1995.

“At that time it was a total death sentence,” he said. “The doctor tells you the story, which is [you have] maybe five years [to live]. Then you go next door to the social worker who tells you how to get a blanket allowance because you won’t be working.

“It was a full-on ‘that’s it’ because nobody survived. To go from that to where it is now is really remarkable. It’s not a death sentence anymore,” he told the Ray D’Arcy Show on RTÉ Radio 1.

O’Neill was speaking after he officially launched a new exhibition at the National Museum of Ireland to coincide with this year’s Pride celebrations.

The exhibition will feature the mauve dress worn by O’Neill during his “Noble Call” speech on the stage of the Abbey Theatre in 2014 ahead of the marriage equality referendum.

The gown will form one of the artefacts of a new Rainbow Revolution exhibition at Dublin’s Collins Barracks museum focusing on the most memorable moments of the LGBTI+ movement in Ireland from the 17th century up to the recent campaigns for equality.

Mr O’Neill said he thought it was “nutty” at first when the museum said it wanted to display the dress.

“People think that I really thought about what I was wearing because I knew it was going to be significant. But I had absolutely no idea, I just thought I was doing a gig at the time. I didn’t think anything of it. So this has come as much as a surprise to me as to anybody else.”

Speaking candidly about his diagnosis with HIV over two decades ago, O’Neill said the first of the anti retroviral drugs came out about a year later.

“They were clumsy, difficult and not so great in the beginning, but they’ve refined them,” he said. “For 24 years they’ve been refining them, so I’ve never felt hopeless about it.

“In the early days, at one point I was on 38 pills a day. Some had to be taken with food, some on an empty stomach, some at night time, some at day time, some with three hour intervals, some were powders and some were capsules.

“They all had side effects so taking pills was at one point my full time job. Now, I literally take a pill in the morning and I forget about it.”

O’Neill also spoke about waiting a year and a half to inform his parents about his diagnosis.

“I wanted to be at the stage where I knew every single thing there was to know about it and I could answer all their questions immediately, and I could present a bright side sort of version,” he said.

“It was a horrible thing, but my parents were amazing as they often have been in my life. There were some tears.”

O’Neill said it was hugely important that the museum was taking part in Pride because “in the past, queer histories were all sort of hidden”.

He added: “It is still really difficult to be a young LGBTI person.”

“It’s one thing to have your flags outside Dublin city council, but it’s quite another thing to be on the street at 2am, or on the night bus.”

The wedding dresses of Minister for Children Katherine Zappone and her late wife Ann Louise Gilligan worn at their wedding ceremony at Dublin Castle in 2018 and the rainbow flag used by activist Conor Kelly to counter protest against anti-abortion groups demonstrating outside Irish hospitals during the abortion referendum will also go on display. – Additional reporting PA