Support the Girls: Regina Hall should have beaten everyone at last year’s Oscars

Review: This biting satirical film is also a heartfelt salute to female camaraderie 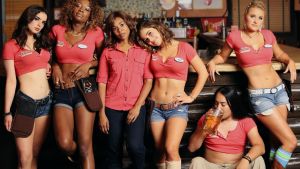 Once the Godfather of Mumblecore, now tapped for the incoming live action remake of Disney’s Lady and the Tramp, writer-director Andrew Bujalski has a knack for making entertaining, character-driven adventures in such unlikely places as an early electronic chess tournament (Computer Chess), a shopping centre gym (Results) and a vintage clothing store (Beeswax).

Support the Girls, Bujaski’s sixth feature film, strikes a familiar baggy, frantic tone, before it sneaks up with both warmth and biting social satire. Lisa (Regina Hall, with a performance that should have beaten everyone at last year’s Oscars) is the beleaguered manager of low-rent, roadside Hooters knock-off Double Whammies.

It’s a terrible job under a mean-spirited, incompetent and racist boss, Cubby (James LeGros), but Lisa takes her duties and her co-workers seriously, rushing to kick out a rude biker, arranging last-minute childcare for young single mother Danyelle (Shayna McHayle, aka Junglepussy). She also has to ensure the uniforms don’t reveal too much: “This is a mainstream place, it’s family place,” incumbent waitresses are told. Or what passes for family place off a Texan interstate highway.

Lisa’s day starts with a burglar trapped in the vents and continues with an impromptu charity car wash in support of Kara (Brooklyn Decker), a Double Whammies waitress who has been arrested for finally fighting back against her abusive boyfriend. She frets that ditzy Maci (Haley Lu Richardson) is flouting the rules by getting too close to a regular customer and decades-older college professor. A more corporate rival, Man Cave, is opening nearby.

Meanwhile, Lisa may be about to lose both her job – Cubby is looking for any excuse – and her depressed husband, Cameron (Lawrence Varnado).

As tensions and obstacles mount – will they get the cable repaired in time for tonight’s big fight – Support the Girls can feel like a daytime, gender-swapped riposte to the cinematic meltdowns of Good Time or After Hours.

Deep, thoughtful characterisation, right down to the smallest role, make for something richer than nervous energy. The dialogue is authentic and often hilarious: “I play sports better than that fag,” says a trainee waitress as she role-plays a male customer.

This is a heartfelt salute to female camaraderie against the ugly, bottom-feeding end of patriarchal capitalism. Let’s hope we haven’t lost Bujalski to the studios.

The Movie Quiz: Maureen O’Hara was raised in which leafy Dublin suburb?
7