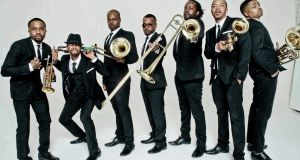 Hypnotic Brass Ensemble matinee
Sugar Club, Dublin Saturday December 9th 2pm €10 (children)/€12.50 (adults) thesugarclub.com
Creative instrumental music aimed at children is pretty thin on the ground, so hip hooray for the hipsters at the Sugar Club for laying on a matinee from Hypnotic Brass Ensemble. Following their gig for the grown-ups on Thursday night, the sonorous Chicago seven-piece play a concert specifically aimed at the young, with plenty of interaction, audience participation and helpful explanations about what’s happening in the music. But parents should be warned: it’s events like this that can turn perfectly good children into jazz musicians instead of doctors, lawyers and tech billionaires.

CEO Experiment/Linley Hamilton/Ben Castle/Paul Dunlea
Arthurs, Dublin Saturday December 9th 9pm €10 arthurspub.ie
There is reason to be grateful that the three members of superb multinational trio CEO Experiment have chosen to make their homes in Dublin. Venezuelan pianist Leopoldo Osio, Hungarian bassist Peter Erdei and Peruvian drummer Cote Calmet are at the forefront of a growing cohort of expat musicians on the Irish creative music scene, and the presence of such virtuosi is having an energising effect on the natives. Augmenting CEO’s funky, well-polished sound for this enlarged Experiment are Dublin-based British saxophonist Ben Castle (son of Record Breaker Roy), Belfast trumpeter Linley Hamilton and Cork trombonist Paul Dunlea – a heavyweight line-up that would grace any scene in the world.

Saxophonist Nick Roth celebrates 10 years of keeping his world-flavoured Yurodny ensemble together with Wave, a new suite of music commissioned by the DLR LexIcon Musicians in Residence scheme 2017. Roth’s achievement is not inconsiderable in a world where ambitious instrumental projects such as this come and go in the blink of an eye, particularly with such a talented, multinational group, including violinists Oleg Ponomarev and Cora Venus Lunny, cellist Kate Ellis and keyboardist Francesco Turrisi. The new music plays on the double meaning of its title, taking its cue from Dún Laoghaire as a seaside town but also as the scene of so many partings over the years, as emigrants waved a tearful goodbye to loved ones standing on the pier.

Berlin pianist Marie Kruttli is a rising star of European jazz, a composer and instrumentalist with a fresh sound delicately poised between contemporary art music and the grooving heart of the jazz tradition. The Swiss-born keyboardist has already collaborated with big international names like saxophonist Tim Berne and drummer Gerry Hemingway, and she was one of the stand-out acts at this year’s 12 Points festival. Kruttli was in Ireland a few months ago for a short tour with guitarist Chris Guilfoyle, and such was the reaction, she’s back with her own trio. It’s a chance to hear an emerging voice of European jazz on her own terms.

Anatomy of a killing: ‘Harry pulled the gun out and took aim’
7

Five lessons of Stoicism: What I learned from living for a week as a Stoic
9