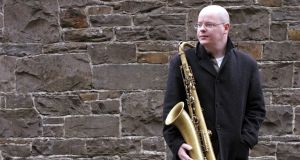 Alina Bzhezhinska Quartet
Courthouse, Tinahely (also St Peter Church, Portlaoise, Sun 9; Station House, Clifden, Mon 10; National Opera House, Wexford, Wed 12; Dock, Carrick-on-Shannon, Thurs 13; Glór, Ennis, Fri 14; Regional Cultural Centre, Letterkenny, Sat 15). musicnetwork.ie
Delicate, unwieldy and hard to drag upstairs, the harp is the rarest of instruments in jazz. Still, American pioneers such as Dorothy Ashby and Alice Coltrane found space in the devil’s music for the instrument of the angels back in the 1960s, and there are a few contemporary exponents, notably Colombian harpist Edmar Casteneda, who played a Music Network tour in 2013. It must have gone well because Music Network are back with another jazz harpist, Alina Bzhezhinska, who has been winning praise recently for her work in reclaiming the music of Alice Coltrane. Her Irish tour continues this week with her own powerful quartet, featuring saxophonist Tony Kofi, bassist Larry Bartley and drummer Joel Prime.

Nigel Mooney Quartet featuring Jim Doherty
Arthur’s, Dublin, arthurspub.ie
Pianist Jim Doherty and guitarist Nigel Mooney are two of the most senior old-school players on the Irish jazz scene, lovers of swing and keepers of the bebop flame. Doherty in particular is an important figure in Irish jazz history, a musician of many facets whose long association with the legendary Louis Stewart began when he auditioned the guitarist for his first ever gig in 1960 and only ended when the two old friends recorded an album together, just months before the great guitarist’s death in 2016. Following a lunchtime concert in the John Field Room yesterday, the quartet – with eminent bassist Dave Fleming and tasteful drummer Myles Drennan – should be in fine swinging form.

Sonas
Workman’s Club, Dublin, facebook.com/dublinjazzcoop
The Dublin Jazz Co-Op operates a rolling curator policy and the current programmer of this intimate salon of the new is American-born composer and musician Ethan Edwards. Edwards’s own music inhabits the space where improvisation and composition meet – a space he calls the “halocline” of music (look it up) – and he offers no apologies for pushing the Co-Op’s curatorial envelope a little further this Sunday with Sonas, a classical duo featuring cellist Davide Forti and pianist Francesca De Nardi. As well as pieces by Stradella and Xenakis, the award-winning duo will perform new works by Edwards himself and by leading Irish jazz composer Ronan Guilfoyle. So go on, dip a toe in the halocline (seriously, look it up).

Michael Buckley’s House of Horns
Lost Lane, Dublin
Saxophonist Michael Buckley, scion of one of Ireland’s pre-eminent jazz dynasties, is in such demand as a sideman (most notably as a member of Glen Hansard’s touring band) and as a studio producer, that opportunities to hear him cut loose with his own band are rare. But that is about to change as the uber-talented saxophonist embarks on a new monthly residency at Lost Lane with his Brecker Brothers-inspired House of Horns. The band’s debut release in 2013, It Is What It Is, was an exhilarating blast of old-school jazz rock and, given the sort of company Buckley keeps – the nine-piece band includes vocalist Margot Daly, trumpeters Ronan Dooney and Mark Adams, bassist Adam Taylor and drummer Jason Duffy – this new residency should become a regular fixture for discerning rockers and jazzers alike.

Brian Dunning Quartet
Arthur’s, Dublin, arthurspub.ie
Brian Dunning is one of the few Irish musicians to open a dialogue between jazz and Irish traditional music, notably with the band Puck Fair, and the battery of instruments he has listed for this concert – alto and bass flutes, whistles, electric pipes and bodhrán – only hint at his wide range of interests and influences. Joining the venerable flautist for a mix of jazz standards and his own Irish and world music inflected originals, is a powerful band including Van Morrison’s long-standing bassist Paul Moore, silky pianist Johnny Taylor and first-call Dublin drummer Dominic Mullan. Special guests are also promised, and in view of the 68-year-old flautist’s long and varied career, you never know who might turn up.

Two Divas and a Piano
Whale Theatre, Greystones, Co Wicklow
Despite the name, there is little that is diva-ish about the authentic, down-to-earth vocal performances that Carmel McCreagh and Flo McSweeney deliver here, and “a piano” only hints at the levels of empathy and craft that Fiachra Trench brings to this popular trio. The repertoire runs from burnished chestnuts by Berlin, Gershwin, Ellington et al to gritty jewels by Joni Mitchell and Tom Waits, but each song is convincingly inhabited by McCreagh and McSweeney, either individually or together, and in Trench, who has worked with some of the biggest names in popular music, including Paul McCartney and Elvis Costello, they have the sort of intuitive support that vocalists need when they’re putting it all on the line.

Honor Heffernan Quartet
Lost Lane, Dublin
The monthly Sunday Jazz Sessions at Lost Lane, programmed by promoter Dominic Reilly, continue with a rare appearance in a jazz setting from vocalist Honor Heffernan. Though she could lay some claim to be Ireland’s pre-eminent jazz vocalist, with a string of fine albums under her belt to prove it, in recent years Heffernan’s muse has led her in a more theatrical direction, in particular her Whistling Girl show with composer Trevor Knight, an arch celebration of the wit of Dorothy Parker, which was acclaimed internationally. But here’s a chance to catch the riveting Heffernan with a top-flight jazz rhythm section, featuring the vastly experienced British-born pianist Phil Ware, with subtle support from bassist Damian Evans and drummer Dominic Mullan.

Dubin Jazz Co-Op: Voices
Workman’s Club, Dublin, facebook.com/dublinjazzcoop
As Ireland’s elder statesman of the jazz guitar, Tommy Halferty has nothing left to prove, but the Derry-born guitarist is getting busier and sounding better than ever. His new quartet Voices is drawn from his colleagues in the jazz department at DCU, who bring the required heft to tackle new compositions from the leader as well as music by influential Brazilian master Hermeto Pascoal, and by long-time Halferty favourites James Taylor and Paul Simon. Japanese-born pianist Izumi Kimura and bassist Derek Whyte have been working in an exploratory trio with Halferty for some years now, but sophisticated vocalist Jenna Harris will add another interesting layer.