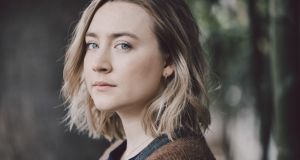 Actor Saoirse Ronan who stars as the Galway Girl in Ed Sheeran’s new video for the single, shot in the west of Ireland earlier this week. Photogrpah: Elizabeth Weinberg/The New York Times

Musician Ed Sheeran has confirmed that actor Saoirse Ronan will star as the Galway Girl in his new music video, shot in the west of Ireland earlier this week.

Speaking ahead of his second sell-out gig at the 3Arena this week, Sheeran revealed that Ronan would star in the much anticipated video from his latest album Divide. The music video, which also features comedian Tommy Tiernan, was filmed in Salthill on Tuesday.

The city of the tribes clearly holds a place in Sheeran’s heart. He famously included home video footage of him busking in Galway city as teenager in the video for his song Photograph.

Describing Ronan as a “phenomenal talent” Sheeran told RTÉ 2FM’s Eoghan McDermott show it had been amazing to watch Oscar-nominated actor take part in the shoot.

“It was like a really phenomenal thing to watch, I’ve never really seen a young actor or actress that good. She’s really talented.

“It’s kind of weird because I was shooting some of the video myself, there are some points when I’m holding the camera and she just... off screen is normal and just like a cool person then as soon as the camera goes on she just turns... it’s amazing to watch.”

Sheeran admitted last month that his record label was very hesitant about including Galway Girl in his latest album because “apparently folk music isn’t cool”.

“My argument was always: well, the Corrs sold 20million records,” Sheeran told the Guardian. “The label would say, ‘Oh the Corrs, that was years ago,’ but who’s tried it since the Corrs? There’s a huge gap in the market, and I promise you that in two years’ time there will be a big folk band that comes up that’s pop, and that will happen as a result of labels being like: ‘Oh shit, if he can put a fiddle and uilleann pipe on it, then we can try it as well’.”

Piers Morgan: ‘If Meghan Markle did to you what she did to me, you would be p*ssed off’