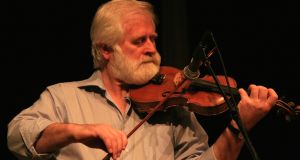 “There’s always been a bit of a mystery about the fiddle,” John Sheahan muses. “Every time I pick it up, I wonder what kind of a sound I’ll get out of it.”

He’s served his time (some five decades of it) with what he impishly describes as “this loosely knit band of vagabonds”, The Dubliners, until they decided to call time, performing their final set on Jools Holland’s Hootenanny in 2012. Seven years on, he’s looking forward to celebrating his 80th birthday, with a diary that’s as busy as he’d like it to be.

Fiddle player, composer, poet, wood carver, origami enthusiast, John Sheahan wears his passions lightly. A self-described “orthodox person”, he served his time as an electrician and a draughtsman in the ESB, before throwing his lot in with “this desperate, disparate group, The Dubliners, one that you wouldn’t encourage your son or daughter to join”.

Sheahan’s musical ability was nurtured early on, with his Limerick-born father (who didn’t play an instrument) teaching him tunes by lilting them to him with painstaking precision. An early introduction to the tin whistle at school, and a sheaf of productive years spent at the School of Music meant that he embarked on his early adult life with a solid grounding in music, and an appetite for adventure.

Although The Dubliners were seen primarily as a ballad band, anchored by the charismatic Luke Kelly and Ronnie Drew, John Sheahan and Barney McKenna were the formidable instrumental wing, and Sheahan would quietly compose his own tunes, whenever they suggested themselves to him.

“I didn’t need time for writing music,” he offers, sitting at home, surrounded by his fiddles, whistles and poetry. “In some kind of magical way, I found that tunes find me. I have a theory about that. My theory is that when a composer says ‘I’m after writing a new tune,’ well, God knew that tune from eternity, so he’s just after discovering the tune, not writing it, really. It might have been a struggle to write it, but nevertheless the tune has existed in some kind of spiritual form already.

In some kind of magical way, I found that tunes find me

“Very often, I’ll pick up the fiddle and one part of my mind is doodling while the other part is looking out for the patterns that might be the building blocks of a tune. I see myself as having been lucky to be in the right place at the right time, when a little gem falls out of God’s pocket.”

Listening to him recount the rollercoaster life on the road, filling the Albert Hall a few times a year, having Seven Drunken Nights banned by RTÉ, and reaching number five in the British Charts in 1967, and then being invited to guest on Kate Bush’s 1985 album, Hounds of love, not to mention the uncorked delights of The Dubliners’ collaboration with The Pogues (whom Sheahan saw as “a younger version of ourselves”), it’s no surprise that he saw himself as “the mortar between the bricks” of the founding members of the band, Ronnie Drew, Barney McKenna, Luke Kelly and Ciarán Burke.

“How privileged we all were, to have met each other,” he offers gently, “to be in the same time and the same place together.”

He was the sensible one: persuading The Dubliners to squirrel away some of their earnings for their own sound equipment, and a rainy day fund. He was the band’s chief negotiator with manager, Phil Solomon, ensuring they were paid their agreed fees and royalties on time. Was he the one with the business savvy?

“We had a kind of streetwise attitude, I suppose,” Sheahan offers. “We didn’t see the business side of the music as something lost in the mists of the air. You had to keep a close eye on it. I’ve seen some young kids who signed a record deal, and when they’d get their royalty statement, there would be feck all left.”

John Sheahan finally called time on The Dubliners at the age of 73. Since then, he’s been busily collaborating, gigging, writing poetry and wood carving.

“It’s funny, but I think my creativity went into words for a few years,” he smiles, recounting his first foray into the world of poetry. Fiddle Dreams was published in 2015 by Dedalus Press, an intimate collection of poems and lyrics. “You start looking at things from a different perspective. You’re an observer outside something that you were enclosed in before.”

He was 60 before he wrote his first poem. The time was right, he figures.

“I was probably subconsciously building up images and ideas up to the age of 60,” Sheahan surmises. “If I’d started earlier, I wouldn’t have much to say, lack of experience.”

Although he missed the camaraderie of life on the road “a little bit”, Sheahan found himself encountering a whole new circle of friends through poetry.

“Very generous people: poets,” he notes with one of his many ready smiles. “At first I felt uncomfortable among them, and would say, ‘I’m only an amateur.’ But one of them said to me: ‘Sure, we’re all amateurs when we start a new poem on a blank page.’ Those were very encouraging words. And through poetry, I met people I’d never have met otherwise, like Seamus Heaney and Michael Longley: when Michael and I meet, we usually compare beards.”

When he’s not making old songs anew, as he’s done with Declan O’Rourke and Damien Dempsey in their aptly titled trio, The New Triangle, or hightailing it off to Carnegie Hall to accompany Glen Hansard (in the company of Brendan Begley), he’s conjuring fresh shapes from the air with fellow fiddle player and composer, Colm Mac Ion Iomaire. The pair are plotting a duo album over the coming year, but not until Sheahan releases his own solo album before year’s end, populated by a raft of surprisingly baroque tunes composed by himself.

I think there’s some connection between wood carving and poetry and music. It’s all making shapes out of the air

At this point in his life, perspective is everything. And the fresher, the better. That’s where another of his relatively recent pursuits – wood carving – comes in.

“It forces you to observe things from a different perspective,” Sheahan offers, as he reveals a number of tastily carved pieces, from a kestrel to a trio of dolphins, and a photo of a carved river god which he made for Declan O’Rourke. “You have to be a keen observer of shapes and contours. I think there’s some connection between wood carving and poetry and music. It’s all making shapes out of the air.”

He relishes recounting the ease with which The Marino waltz came to him, doodling on his daughter, Siobhán’s, harp. Or the way his son’s tired but eminently musical yawn transmuted into a beautiful tune. Musical notes hang in the air, ripe for the picking.

At the end of the day, Sheahan is a man at ease with himself and with the world, 80 years a growing.

When day is done, and evening firelight beckons
When tradesmen all are free from toil and care
I linger in the shadows with my fiddle
And softly leave my signature in air

Excerpt from Signature by John Sheahan