Sing Street review: A New Romantic vision of Dublin in the 1980s

It may paint an unnaturally rosy picture of 1980s Dublin, but terrific songs and excellent performances make John Carney’s latest musical a delight 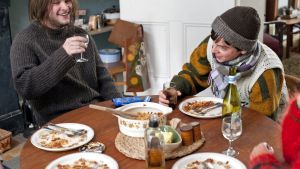 Six years ago, working with his brother Kieran, John Carney made an undervalued comedy named Zonad that looked, at first, as if it might be about alien visitation. Weirdly, nothing in that film is quite so fantastic as what goes on in the director’s latest triumphant musical.

Digging deep into the director’s own biography (Carney once played bass with The Frames), Sing Street takes us back to Dublin in the 1980s.

Middle-class Cosmo (Ferdia Walsh-Peelo) is sent to the rowdy Synge Street CBS when his believably louche professional dad (Aiden Gillen) finds clients slipping away. The kids are bullies. The teachers are worse. The Brothers are unspeakable. A degree of escape arrives when, largely to impress a glamorous tearaway (Kelly Thornton), he forms a pop band that somehow achieves post-New Romantic transcendence.

Here’s where the fantasy comes in. Dublin looked a lot nastier in the 1990s, let alone the 1980s. The kids of that generation were almost certainly not quite as easy on the eye, as nicely attired or as polished of tooth. The band becomes very good, very quickly, and problems slip away, very sweetly, as we drift towards an insanely romantic denouement. Prepare for all the feels.

None of this is meant as criticism. Concluding what feels, after Once and Begin Again, like a musical trilogy, Sing Street trades in a similar sort of heightened reality to that which energised Stanley Donen’s post-war musicals. The terrific songs by Carney and Gary Clark – which rejoice in the unfashionable influence of Duran Duran – allow the characters a fluency and an emotional honesty they can’t manage in everyday conversation.

The consistently excellent cast embrace the shifts in tone with staggering assurance. Jack Reynor seems to have grown a foot to play Cosmo’s opinionated, but slightly lost, older brother. Mark McKenna is hilarious as the rabbit-fancying musical genius. But the real revelation is the vulnerable Walsh-Peelo who, in his big- screen debut, manages the tricky feat of stealing the film without ever seeming showy or mannered.