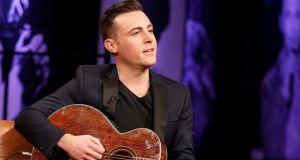 Country and western singer Big Tom was recalled as “the Johnny Cash of Ireland” on Friday night during the Late Late Show Country Special.

Big Tom started his lengthy career in country music in the early 1960s as a member of the Mighty Mainliners Showband. After some years traversing the length and breadth of Ireland on the ever-busy showband circuit, in 1966 the Mighty Mainliners appeared on RTÉ’s Showband Show, performing the song Gentle Mother, which became the band’s first sizeable chart hit.

From the early 1970s, the name Big Tom and the Mainliners was adopted by the band.

Other hit songs followed for Big Tom, both with the band and during his solo career, including Four Country Roads, The Old Rustic Bridge, Back to Castleblayney, Old Log Cabin for Sale and Broken Marriage Vows.

In 2016, Tom McBride was inducted into the Irish Country Music Awards Hall of Fame.

“In my opinion he is the Johnny Cash of Ireland and I think his music will live on for many years to come,” said Carter.

Carter also sang a moving rendition of Gentle Mother, with the audience joining in.

“No matter where he went in the country, everybody thought that Tom was a member of their family . . . He was an ordinary man who became a superstar, never knew he was a superstar and lifted every ordinary man to think that they were superstars.

“There is a hole in our heart that can’t be filled, and there is a hole in the culture of Ireland . . . there’s an era, a man, a generation and a music, an art that has come to an end and we can’t come to terms with it.”

Singer Susan McCann said Big Tom was always a support to young singers coming up in the country and western scene.

The Late Late Show Country Special is a ratings winner for RTÉ; last year’s special pulled in 700,000 viewers – a 50 per cent audience share.