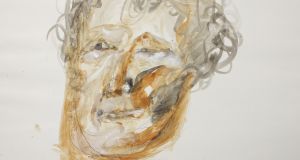 A portrait of Seamus Heaney by painter Barrie Cooke.

A cache of recently-discovered correspondence, poems, drawings, and paintings, by Seamus Heaney, Ted Hughes, and the painter Barrie Cooke, is being prepared for public display by Cambridge University.

A previously-unpublished poem by Heaney called The Island – the name of Cooke’s one-time home in Thomastown, Co Kilkenny – is among the material acquired earlier this year from the estate of the late painter.

Cooke, who was born in England, lived much of his life in Ireland, and was a long-time friend of Hughes, with whom he shared a passion for fishing, and of Heaney (who was less enthusiastic about fishing).

At one stage the two poets were discussing moving to homes close to Cooke’s in Co Kilkenny, along the river Nore.

Cambridge academic Mark Wormald visited Cooke in Co Kilkenny in 2012 and 2013, and learned of the existence of the material during the second visit.

By 2013, Cooke was living in sheltered housing, in “a very, very Spartan maisonette”, in Graiguenamanagh, Co Kilkenny, the academic told The Irish Times.

“I read him this 200-line verse fishing diary that Ted had written in 1980, when Barrie had called him to say there was an unusually good run of salmon up the river Nore,” and Hughes had rushed to Ireland to go fishing with the painter.

Cooke, who by then had dementia, listened silently to Wormald reading the diary, up to the final line, “it’s the most beautiful fish I’ve ever seen, said Barrie”.

Without a pause, the painter then said: “I did say that, Mark, and it was. Would you like to see the letters?”

He then reached behind into a curtained off cubby hole and pulled out a cardboard box “stuffed” with letters, drawings and other material, including a fair copy manuscript of The Island.

There was also correspondence with the poets Paul Muldoon and Robert Lowell in the box.

This material, and other poems, letters, and work found in Cooke’s former studio after his death in 2014, has been bought by Pembroke College, Cambridge for a “six-figure” sum.

The material includes 150 paintings and drawings done by Cooke to illustrate his poet friends’ work.

At the time Heaney wrote The Island, he and his wife, Marie, had decided to leave Belfast to move to a cottage in Co Wicklow.

In a letter to Cooke in 1972, the poet said that the confidence Hughes and Cooke had in him had helped convince him and his wife to risk Heaney giving up his job in Queen’s University, Belfast.

Going freelance could “ideally release energies as exhilarating and subversive as those that must rise in a guerilla fighter when he joins up”, Heaney wrote in the letter.

The letter was sent along with the copy of The Island, which Heaney referred to as a type of “grace before freedom”.

A decision on the publication of the previously-unpublished poem will be taken by the Heaney estate, Wormald said.