For Hollywood’s ‘male feminists’, sorry seems to be the hardest word

The Meming of Life: after allegations of sexual misconduct, a tsunami of insincere social media apologies. Plus: who invented the selfie, Paris Hilton or the Library of Congress? 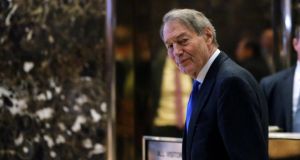 Since the revelations about Hollywood mogul Harvey Weinstein, a steady slew of sexual misconduct allegations have surfaced on a daily basis. In fact, one New York Times writer clocked their rate at an oddly decimal 2.5 a day. The steady clip of allegations against figures such as Louis CK, Kevin Spacey, Brett Ratner, James Toback and, latterly, Charlie Rose has shown the internet to be a powerful amplifier of the voices of victims throughout the entertainment industry.

In its wake, another disconcerting trend has emerged: the distinctly unconvincing social media apology. Whether it’s Charlie Rose referencing his “lifelong” commitment to female advocacy, or Al Porter gesturing obliquely to his “flamboyant persona”, many have found such statements off-putting, to say the least. God-tier humorists Clickhole were among the first to parody this phenomenon in their pitch-perfect article: “As a male feminist, I’d absolutely crush it if I ever had to apologise for sexual misconduct.”

Poet Isobel O’Hare has been taking a more artistic approach, removing the offal from these statements and constructing poetic works in their place. Shared via her Instagram @isobelohare, her redacted version of Louis CK’s 300-word statement comes to just eight words: “my dick . . . is . . . a question . . . I . . . run from”. Even if you’re not prepared to own your own actions, someone will be on hand to make you do so.

Elsewhere, another cultural heavyweight seized on ownership of a different sort. Paris Hilton – now hovering on the spectral fringes of relevance, like an odd, time-trapped ambassador from Planet 2008 – has taken time from her busy schedule of public appearances, DJing and recording what must surely be the worst music known to science, so she could formally declare herself the inventor of the selfie.

“11 years ago today,” she tweeted on Sunday, summoning all the sombre gravitas of a Civil War documentary, “me & Britney invented the selfie.” The image, which shows her bending a camera toward herself and Britney Spears, didn’t exactly amount to great proof, so it wasn’t long before the Twitterati proffered their own alternatives, from a 1999 effort by Bill Nye the Science Guy, to another by George Harrison outside the Taj Mahal in 1966.

But, step forward America’s Library of Congress, who surely dropped the mic with their conversation-ending selfie taken by Robert Cornelius in 1839. “Sorry to be the bearer of bad news @ParisHilton” they later announced, with no little amount of sass. Rumours of a subsequent Library of Congress reality series, perfume range and DJ tour are as yet unconfirmed.

Prisoners of History: What can we learn from statues to heroes and monsters?
Real news has value SUBSCRIBE