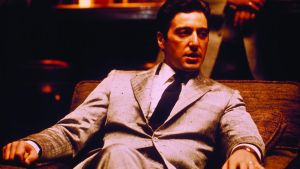 It is a commonplace of cinema distribution that, though people always say they want to see more vintage titles on the big screen, the masses stubbornly stay at home when such films are programmed. Two exceptions consistently buck the trend: the films of Alfred Hitchcock and the first two parts of The Godfather . It is, thus, no great surprise to see The Godfather Part II receiving a digital overhaul for its 40th birthday. The film still looks like an absolute marvel.

Francis Ford Coppola lived through various nightmares during the production of the original Godfather . The studio, uncertain about its director, was constantly on the point of firing him. Who was this Al Pacino guy? Wasn’t Gordon Willis’s cinematography absurdly dark? Surelynobody wants to watch Marlon Brando anymore?

When the film became a smash, Coppola ensured that he would have complete control for Part II . The result is among the very greatest American films.

Using the same narrative template he devised for The Godfather – we begin with a family celebration and progress to gangland consolidations that cause Michael Corleone to lose parts of his soul – the director dares to move even more slowly, shoot even more darkly, and construct and an even more complex plot. Once again, the film looks and feels more like one of Luchino Visconti’s Italian epics than any classic US gangster picture.

The Godfather Part II went on to become the first sequel to win the Oscar for best picture. For decades after, when drawing up lists of the best-ever follow-ups, hardcore cineastes would place Coppola’s film just ahead of James Whale’s Bride of Frankenstein (1935).

The parallels are educative. Both Coppola and Whale, liberated by success, were intent on returning to their source material and making up for compromises in the opening production. Both are superior to their predecessors. Neither has aged one day.