Eating Animals: An anti-meat film to chill the blood and dull the appetite

Review: Future generations may look back on these practices as we now do at slavery 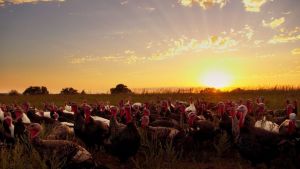 The farming of turkeys is one of the distasteful practices described

Here are truths about the meat industry that most carnivores already know, but choose to bury beneath stacks of self-denial.

Based on a non-fiction book by Jonathan Safran Foer, Eating Animals gets through a lot of information about modern, intensive farming in an impressively tidy running time.

There is little here the intelligent viewer doesn’t already suspect, but many details chill the blood and dull the appetite. The diseased chickens with rubbery limbs and swollen bellies. The shed-loads of pigs whose ordure is washed straight into the mid-western ecosytem. The turkeys with artificially boosted bodies.

Christopher Quinn’s film makes it clear that there was no great design at play. An ordinary American farmer received 10 times as many chicks as ordered and decided to experiment with sheds and electricity. Factory farming was born.

Colonel Sanders began selling chicken dinners from his family’s gas station decades before future owners of KFC would avail of mechanical methods to strip and pack carcasses. We ended up here by accident, but a sinister order has taken over.

One expert in Eating Animals points out that the great capitalist enterprise that is chicken farming is now run by something “like a Soviet Politburo”. Few small agricultural entrepreneurs have a chance.

The horror stories are, alas, more persuasive than the later, hopeful scenes of firms developing vegetarian replacements for meat. The film argues implicitly for larger, more radical changes in how economies are organised. It does so through the conventional language of the campaigning documentary.

Natalie Portman, a co-producer, reads lumps of Foer’s text as the action moves from farmer to academic to activist. The worst sort of horrors are kept from the screen, but what we see is ghastly enough to make hells in the imagination.

We must hope that future generations will look back on these practices as we now look back at the dunking of witches and trafficking of slaves.

‘Jennifer Aniston cried in my lap’: the inside story of Friends
6

Keanu Reeves: Everyone is talking about his new girlfriend, and it’s not why you think
7

Vox by Christina Dalcher: A dystopia where women are gagged
10

Bear Grylls’s Dublin surprise: He’s Irish, and he has the passport to prove it
Real news has value SUBSCRIBE