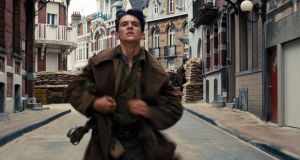 The second World War film is hardly voguish and this particular war film doesn’t play by the rules. There are no Americans nor, indeed, Nazis, to be found. There is hardly any blood, and nothing like guts. There’s little flashy CGI – instead we get real planes, boats and scenes shot on the actual French beaches where the infamous evacuation took place. Taking cues from such tactile Soviet war films as Come and See, Christopher Nolan’s Dunkirk is entirely experiential, yet entirely without gore. There is no chatter about sweethearts back home; there is only the impulse to escape and survive. Hans Zimmer’s pounding score – a symphony that draws loudly from incoming fire, heartbeat, and finally, Nimrod – amplifies the rising panic. Hoyte van Hoytema’s camera buzzes through the skies and across sea and sand. The crunching realism, as captured on large format film stock, is unmistakable, and puts every other rival summer spectacle to shame. If you didn’t believe in the Miracle of Dunkirk before, you will now. – TB Review/Trailer

The shark movie, like its piscine equivalent, never sleeps: it swims on, no matter how big the boat is. 47 Metres Down is a sleeper summer hit in the US, an impressive feat considering the carefully controlled contemporary release schedule, not to mention heavyweight competition (Wonder Woman, Cars 3, All Eyez on Me). The dialogue and the set-up – often one and the same thing – is rather rudimentary. This solid actioner might have featured more sharks, or – as with the nailbiting, similarly themed Open Water – featured more spaces where sharks might be. A pleasing – if somewhat pilfered denouement – rounds off a perfectly good yarn. – TB Review/Trailer

Documentary-maker Matthew Heineman has moved on from Cartel Land, his gripping study of Mexican drug wars, to an examination of the citizen journalists bravely standing up to Islamic State in the Syrian city of Raqqa. The award-winning movement known as Raqqa is Being Slaughtered Silently (RBSS) have worked hard to counteract the stream of propaganda coming from the self-proclaimed caliphate. Their reward has been persecution and exile. City of Ghosts stands as a worthwhile tribute to remarkable people and the film is at its best (and its most terrifying) when relaying the footage from RBSS. – DC Review/Trailer

Some 15 years have elapsed since the biotech advances of Rise of the Planet of the Apes  and inter-species conflict rages on, despite the best efforts of Caesar (Andy Serkis), who has led his family and hundreds of apes to a waterfall-masked stockade. A battalion of Homo sapiens stalk the apes, aided by simian collaborators. The ruthless soldiers are under the command of Colonel McCullough (Harrelson), a rogue commander with genocidal thoughts and a cult following.  There is  a pronounced Trumpian subtext in McCullough’s unholy and unhinged beliefs, an anachronistic manifesto of Christianity, patriotism, speciesism, anarchy and paranoia. “Why does he need a wall?” wonders Caesar. Because science fiction is always a helpful, terrifying guide to the present. TB Review/Trailer

In Sofia Coppola's brief, beautiful, anaesthetised US Civil War drama, Colin Farrell is a wounded Corporal who finds himself in a crumbling mansion inhabited by women alone. Before you can say “biscuits and gravy”, the suppressed sexual passion is straining the bolts on the metaphorical pressure cooker. The Beguiled is a rare film that one might reasonably wish longer. The picture spend almost all its duration leading us to the edge of the cliff and then kicks us off before we have had time to properly enjoy the view. Flawed, but undeniably worthwhile. Strange, but mostly in a good way. There’s nothing much like it in cinemas. DC Review/Trailer

Spider-Man is back to battle The Vulture and endure being a teenager. Among Homecoming’s many virtues is an acknowledgement that these superhero things are essentially for children. The new film convincingly casts a 21-year-old as a 15-year-old. His friends seem younger still. None of this means that the picture is facile, cheap or lacking in ambition. Spider-Man: Homecoming is more satisfying than any film to date in the Marvel Cinematic Universe. Fun is still fun. DC Review/Trailer

Unthinkable: Is it ethical to eat plants?
10