In the Rocky offshoot Creed, Ryan Coogler has made a rare boxing film with a black actor as star. The director talks about how he won over Sly, and the cultural importance of Apollo Creed

Director Ryan Coogler and stars Micheal B. Jordan and Sylvester Stallone discuss Creed, a new chapter in the legendary Rocky series, which is released in Irish cinemas on January 15th. Video: Warner Bros. 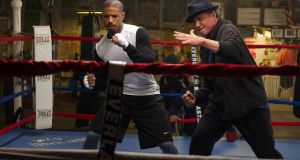 Michael B Jordan and Sylvester Stallone in Creed 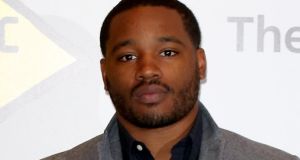 Twitter, that most reliably intemperate of mediums, went into a tizzy when Sylvester Stallone, having won the Golden Globe for best supporting actor, forgot to thank his Creed co-star Michael B Jordan and the film’s director, Ryan Coogler.

“#waitwaitwait, Ryan Coogler & Michael B Jordan, Thanks for acting with me!!! Loved Sly, but . . . ” tweeted Samuel L Jackson.

“Well. I’m gonna go ahead and thank Ryan Coogler + Michael B Jordan since no one else is. Thank you, brothers. Good work,” added Selma director Ava DuVernay.

Today, stopped off in London on promotional duties for the same film, Coogler laughs at the kerfuffle.

“[Stallone] stopped the music afterwards and said some really kind things about all of us,” says the film-maker. “But that didn’t get televised. He was overwhelmed. I’ve been there too, you know? You have to thank this person and that person. People always end up getting left out. But anyone who knows him and our working relationship knows how kind he has been and is to all of us. The fact that the picture got made at all demonstrates how crazy generous he is.”

Stallone, now with an Oscar nomination for his role, has plenty to thank Coogler for, but the director, who is still in his 20s, had yet to make a feature film when he first approached Stallone with a pitch for a seventh Rocky film. While studying at college, the Oakland-born football scholar would prepare for big games by watching the most fist-pumping sequences from Rocky II.

There was an intergenerational family love affair with the fictional Italian pugilist. Coogler’s father, Ira, a juvenile-hall probation counsellor, had bonded with his mother over Rocky movies in the last months of her illness with breast cancer.

In 2012 Ira’s muscles began atrophying; doctor’s suspected amyotrophic lateral sclerosis, Lou Gehrig’s disease or multiple sclerosis, but struggled to make a diagnosis. “This man could pick up me and my brothers with one hand,” says Coogler. “And all of a sudden we had to carry him to the bathroom. It turned out his body wasn’t processing vitamin B12, but at the time doctors were saying all kinds of scary stuff. The muscle damage is not really reversible but he’s in better shape now. But the experience made me think about what it means to be a man. And it made me think about his favourite character, Apollo Creed.”

Apollo Creed, for those who have failed in their cultural duty to sit through a Rocky film, was the undisputed heavyweight champion of the world until Rocky Balboa (Stallone) won the title at the end of the second film in the sequence. By Rocky III, Balboa and Creed (as essayed by the effortless charismatic Carl Weathers) are best pals, a friendship that continues into Rocky IV, whereupon Apollo is tragically dispatched by Soviet Olympic boxer Ivan Drago (Dolph Lundgren).

Despite this untimely end, Apollo Creed remains one of the most important and popular African-American characters of mainstream 1970s and 1980s cinema.

“He was the coolest,” says Coogler. “He meant everything to us. He’s obviously inspired by Muhammad Ali, who was an amazing athlete and man. Everyone in black culture and sports culture looks up to Muhammad Ali. So I loved that character. I loved that he was in control of his own fate. And I always wondered what ever happened to his family. So that was what I explored with this film.”

Coogler pitched his idea to Stallone before the young hot shot’s debut feature, Fruitvale Station – a film that chronicled the murder of Oscar Grant by a California police officer in 2009 – saw the film- maker take home two major awards from the 2013 Sundance Film Festival.

It surely can’t have been easy asking Stallone to sign over his most beloved creation?

It was easier than you might think, says Coogler. “Sly is just too cool. He’s a dude. And the thing about Sly is that he’s a great listener. He’s not often off in his own head. He prides himself on paying attention. He heard me out at the time, even though I hadn’t made a movie. I wasn’t naive enough to think he was going to say, ‘Let’s go into production right now.’ But I hoped that down the road, after my first movie, that he’d think about it. And he did.”

Creed, the seventh Rocky film, sees Apollo’s son Adonis (Fantastic Four’s Michael B Jordan) seek out his father’s old buddy Rocky (Stallone) so that the retired Italian Stallion might train him up as a boxer worthy of the surname.

The film has taken more than $105,888,895 at the US box office and has attracted even better notices than the Oscar-nominated 1976 original. It has also proved to be an accidental riposte to those who derided the previous Rocky films for peddling Great White Hope mythology.

The same critics have often lambasted the erection of a Rocky monument in Philadelphia in 1980, when there is no equivalent statue of Philly native Smokin’ Joe Frazier. The timing, notes Coogler, is “pretty ironic”: the newest Rocky film, which boasts an African-American director and star, emerges in the same year that Frazier was finally immortalised in 9ft of bronze in his hometown.

It’s no coincidence that Creed features Tessa Thompson’s Bianca, a character that might be the most nuanced, well- developed “love interest” to appear in any franchise this year.

“It was very important to all of us that Bianca was her own person and was properly representative of women today,” says Coogler. “This is a time of great self-analysis. And it’s coming from the generational hand-off. It’s the same thing that’s rehearsed in the movie. It’s a baby boomer passing the torch along to a millennial. That’s happening all over the world in every profession, including the entertainment industry. We’re coming in and knocking at doors and looking around.

“And we’re asking: why is it that everyone looks the same? Where is everybody else? Why is everyone from the same background? Once you start asking that question, somebody has to answer.”

Creed is a relatively rare example of a successful sequel spinning off from a secondary character in the original project. The film follows Rocky Balboa’s interactions with the son of his late rival Apollo Creed.

But such things do happen, and they can work very well. The TV series Frasier (right) was almost as well received as the earlier Cheers, named for the bar where the shrink drank. (Although The Tortellis, featuring Carla of Cheers, has been long forgotten.)

It’s easy to forget that Alan Partridge was merely one among many on the radio parody On the Hour and its TV incarnation The Day Today. Mork and Mindy spun off from Happy Days. In recent years, we’ve seen Puss in Boots making a lunge for freedom from the Shrek universe. Longer ago, Red Sonja, in the strapping form of Brigitte Nielsen, escaped from the Conan the Barbarian maelstrom.

The revival of Star Wars is sure to trigger a spate of such projects. Han Solo is being given the prequel treatment. The mysterious Boba Fett – a bounty hunter beloved of the most serious Star Wars nuts – was rumoured to be getting his own movie, but that looks to have been nudged into tall grass.

Perhaps the best recent project to involve a supporting character is the highly praised Better Call Saul. Bob Odenkirk plays the lawyer of the title, who will later assist Breaking Bad’s Walter White. It will run and run. Then spawn a spin off of a spin-off.

Laura Veirs: ‘I had a feminist awakening’
8

The Abstainer: Gripping tale of violence, betrayal and vice
9