Napping Princess review: the saddest, loveliest romance since Pixar’s Up

Sci-fi and parallel universe gets a little cluttered, but be sure to stay for the credits 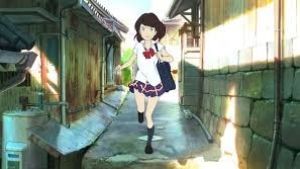 In Heartland, a world of machines and car manufacture, where foremen wear locks and bellow at employees to purchase newer automobiles, a princess and her talking pirate teddy attempt to give heart and life to machines through a magic tablet.

Back in Japan, as the country prepares for the 2020 Tokyo Olympics, a sleepy young woman named Kokone is studying for her university entrance exams when her father, a talented mechanic, is arrested.

Heartland exists only in her dreams and its inhabitants, including a sorcerer and a king, seem to have real world equivalents (that Kokone’s dad turns up as the romantic, swashbuckling Peach in Heartland is all kinds of Freudian).

Our heroine’s mysterious past catches up with her just as her dreamscape is threatened by a Godzilla-like Colossus. As she sleeps, the Engineheads – gargantuan fighting machines manned by humans – do battle. But her own history – a thrilling biography that touches on electric cars, familial discord, Machiavellian schemes, and new inventions – is trickier to navigate. Are these alternate universes slowly bleeding in to one another?

Kenji Kamiyama came to international prominence with Ghost in the Shell: Stand Alone Complex and Eden of the East. And while this new anime is unabashedly cute (in addition to the chatty stuffed animal, there’s a motorbike that can transform into a friendly Baymax shape), it’s jollied along by ambitiously complex parallel worlds. The science fiction – a mad mash-up of mecha, mechanics, medieval fantasy, and Elon Musk – can get a little cluttered, what with the robots and the boardroom drama and the soap opera and the magic. But it takes a special, innovative, spectacular kind of film to simultaneously invite comparisons with Sailor Moon, The Wizard of Oz, and Primer.

And just when we thought the Marvelverse had flogged post-credits action to death, Napping Princess hits you with a family scrapbook drama playing out under the closing reel: it’s the saddest, loveliest condensation of a romance since the overture of Pixar’s Up.