Magic in the Moonlight review: Woody does it again – unfortunately 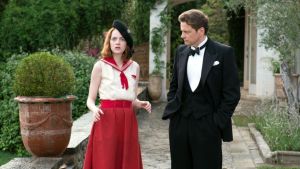 Medium dry: Emma Stone and Colin Firth in Magic in the Moonlight

Film Title: MAGIC IN THE MOONLIGHT

It’s 1928 and the master illusionist Wei Ling Soo enjoys an international reputation as a disappearer of elephants and debunker of mystics. Following a performance before an adoring crowd in Berlin, the magician, who is actually a Londoner named Stanley Crawford (Colin Firth), is joined by childhood chum and fellow conjuror Howard (Simon McBurney).

His old friend has been enlisted by a wealthy American family, the Catledges, to investigate a charming clairvoyant named Sophie (Emma Stone). The clan’s youngest son Brice (Hamish Linklater) is smitten with the young mystic. So far, Howard is baffled by her tricks. How do her “vibrations” work?

Stanley happily accepts the challenge and joins the Catledges at their home on the Côte d’Azur, popping in to visit his aunt Vanessa (Eileen Atkins) along the way. But even the cynical, self-regarding Stanley can’t figure out Sophie’s magical machinations. And far worse, there’s something magical about her smile.

A sort of spiritual sequel to the wildly successful Midnight in Paris, Magic in the Moonlight represents everything that’s good and bad about late Woody Allen. There are fun exchanges, pitching reason against magic, though such arguments get lost under too much repetition and too many allusions to Nietzsche. Working from a clearly hurried script, the prolific writer-director does not appear to call for second takes, even when such things are required. There are several supporting performances that give the impression of somebody reading aloud with a following finger under each word. Firth attempts to reinvent the wheel by bringing a sharper tone to the central Woody Allen ersatz role. It’s a brave choice, but not a wise one. Take away the chattering neurosis from an Allen joint and you lose much of the humour. Stone brings a lovely charming smile to the proceedings and somehow contrives to shine more brightly that the Riviera sun.