Mary Poppins Returns: Emily Blunt floats down on a kite

In a trailer for the sequel, grown-up Jane and Michael reunite with their magical nanny 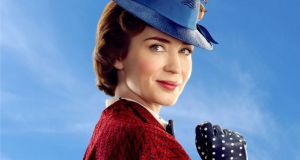 Disney chose its telecast of the 90th Academy Awards to introduce a teaser trailer for the much-anticipated sequel to one of its most beloved films: Mary Poppins Returns.

The clip doesn’t give away much, but we do get to see Emily Blunt as the titular nanny as she floats down from the sky on a kite, and Lin-Manuel Miranda riding a bike and looking an awful lot like Dick Van Dyke’s chimney sweep from the original 1964 musical.

Van Dyke also appears in the new version in a different role, as the son of the penny-pinching banker Mr Dawes.

Meryl Streep, reuniting with Blunt from The Devil Wears Prada and with the director Rob Marshall from Into the Woods, plays Poppins’s cousin, Topsy; another acting legend, Angela Lansbury, plays the Balloon Lady, but neither appears in the teaser.

“It’s wonderful to see you,” Michael tells Mary, to which she agrees: “It is, isn’t it?”

We shall see if moviegoers feel as equally supercalifragilisticexpialidocious when the new “Poppins” lands in US cinemas on Christmas Day.

Slim chance: Why has Eminem’s music aged so badly?
5