Joan of Arc: The world’s most unlikely summer franchise

The official trailer for Joan of Arc, directed by Bruno Dumont. Video: Luxbox 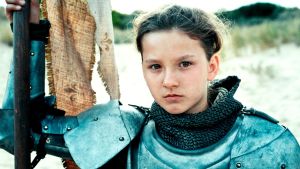 If you were freaked out by the grotesquerie of Bruno Dumont’s cannibal class comedy Slack Bay, if you felt discombobulated when P’tit Quinquin (from the same director) served up an act of terrorism late in an otherwise absurdist culchie satire, then hold on to your hat for the second instalment of the movie world’s most unlikely summer franchise.

Ten-year-old Lise Leplat Prudhomme blazes her way through this wildly inventive reconfiguring of the story of Joan of Arc, a sequel to Dumont’s equally surprising musical Jeannette: The Childhood of Joan of Arc (2017). Swapping Childhood’s heavy metal for Christophe’s wistful synth pop – “Hammers, crushed helmets and swords,” he sings sweetly – this latest screen variant of the Maid of Orleans shares little in common with Carl Theodor Dreyer’s The Passion of Joan of Arc (1928) or Luc Besson’s MTV-giddy The Messenger (1999).

This is not so much a Joan of Arc movie as an anti-Joan of Arc movie. The action – or more accurately wilful inaction – opens in 1429, with the divinely appointed Joan keen to continue killing the British and expelling Burgundians from the Valois kingdom.

The chatter between Joan and her allies among Dumont’s coastal dunes goes on at length, though not nearly as pompously and ponderously as the heroine’s trial for heresy in Rouen. Clerics here occupy the space Dumont ordinarily reserves for bumbling, ineffectual policemen. Cinematographer David Chambille uses the dimensions of the surrounding cathedral to dwarf Joan’s small-minded accusers.

The proceedings witter and drag in a way that serves to highlight the preposterousness of it all, as does the young age of the star, a detail that diverges from the conventional died-at-19 narrative and leaves the viewer to ponder grown men taking military orders from a child talking to a cloud.

As ever the film-maker favours non-professionals, often with odd physical characteristics and odder voices, adding to the droll peculiarity of it all. Ironically, given the subject matter, Joan of Arc isn’t as cod-Bresson spiritual as Dumont’s Hadewijch or Hors Satan, nor is the film as surreal and ridiculous as the director’s recent riotous work.

But it’s a lyrical, defiantly listless, weird, enchanting, singular picture. It’s not for everyone, but those seeking a battle against the English staged in the medium of horse choreography will not be disappointed.