Ian Holm, star of Lord of the Rings, Alien and Chariots of Fire, dies aged 88 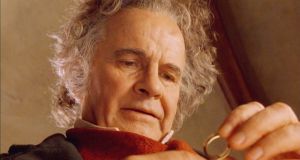 Lord of the Rings: Ian Holm as Bilbo Baggins

Ian Holm, the versatile actor who played everything from androids to hobbits via Harold Pinter and King Lear, has died.

“It is with great sadness that the actor Sir Ian Holm CBE passed away this morning at the age of 88,” his agent said. “He died peacefully in hospital, with his family and carer,” adding that his illness was related to Parkinson’s disease. “Charming, kind and ferociously talented, we will miss him hugely.”

Holm’s final days were documented in a series of pastel portraits by his wife, Sophie de Stempel.

Holm, who won a Bafta and was nominated for an Oscar for his role as the maverick athletics coach Sam Mussabini in the 1981 film Chariots of Fire, may have looked destined for a career in colourful supporting roles on screen – especially after quitting theatre in 1976 after a severe case of stage fright – but he found a new generation of admirers after being cast as Bilbo Baggins in the blockbusting Lord of the Rings trilogy.

Earlier this month he expressed his sadness that he was unable to participate in a virtual reunion for the films, saying: “I am sorry to not see you in person, I miss you all and hope your adventures have taken you to many places, I am in lockdown in my hobbit home, or holm.”

Holm was born in 1931 in Essex, where his father was superintendent of the West Ham Corporation psychiatric hospital; he later described his childhood there as “a pretty idyllic existence”. Falling in love with acting at an early age, he went from the Royal Academy of Dramatic Art, in London, to the Shakespeare Memorial theatre, in Stratford-upon-Avon, staying on to become part of the Royal Shakespeare Company on its foundation, in 1960.

Holm became a leading figure at the RSC, winning an Evening Standard best-actor award for Henry V in 1965, part of the seminal Wars of the Roses cycle put together by Peter Hall and John Barton. He also earned plaudits for his work with Pinter, playing Lenny in the premiere production of The Homecoming (which won him a Tony award after its transfer to Broadway) and then in the 1973 film version, directed by Hall. Not least of all from Pinter himself, who is reported to have said of Holm: “He puts on my shoe, and it fits!”

Holm experienced his severe stage fright, which he described as “a sort of breakdown”, during a performance of The Iceman Cometh in 1976, which he described as “a scar on my memory that will never go away”. Having abandoned theatre, Holm developed his screen-acting career, which had hitherto largely been confined to regular but sporadic parts in British films such as The Bofors Gun, Oh! What a Lovely War and Young Winston. Seen as a safe pair of hands, he was then cast as the android Ash in the Ridley Scott-directed Alien, which gave him hitherto undreamed-of international exposure. This role was followed by his turn as Mussabini, the ostracised running coach of the sprinter Harold Abrahams in Chariots of Fire.

After his nomination for a best-supporting-actor Oscar for Chariots of Fire, in 1982 (which he lost to John Gielgud, for Arthur), Holm was now a bona-fide acting grandee, although one whose eccentric-seeming, pugnacious qualities were best suited for memorable supporting parts. He played Napoleon in Terry Gilliam’s Time Bandits, and the hapless Mr Kurtzmann in the same director’s Brazil; other highlights included Lewis Carroll in the Dennis Potter-scripted Alice fantasy Dreamchild, Dr Willis in The Madness of King George, and Father Cornelius in Luc Besson’s sci-fi epic The Fifth Element. But he did find a leading role in Atom Egoyan’s adaptation of Russell Banks’s The Sweet Hereafter, released in 1997, playing the smooth-talking lawyer who persuades grieving parents to launch a class-action suit after several children are killed in a bus crash.

Holm returned to Shakespeare in 1997, in the Richard Eyre-directed King Lear at the National Theatre in London, and was knighted a year later for “services to drama”. He also appeared in a production of The Homecoming at the Gate Theatre in Dublin in 2001.

Having played Frodo Baggins in a 1981 radio adaptation of Lord of the Rings, Holm was cast as Bilbo in Peter Jackson’s mammoth three-part screen adaptation, with filming on The Fellowship of the Ring beginning in 1999. Bilbo did not appear in The Two Towers, but Holm returned for the final part, The Return of the King, as well as the first and third instalments of the Hobbit trilogy, which were released in 2012 and 2014.

Between the two sets of Tolkien adaptations, Holm developed an unexpected reputation as a lothario, after the publication of his autobiography in 2004. Hailed by the Daily Mail as “Lord of the Flings”, he candidly chronicled his serial marriages and extramarital affairs. He is survived by his fourth wife, de Stempel, and five children from previous relationships, as well as by his third wife, the actor Penelope Wilton. – Guardian

How do you identify a legitimate government?
4

The best artworks to see in Ireland’s reopened galleries
5

The Jakarta Method: The US playbook of suppression across the world
9

Hamilton the movie soars above its stage-bound origins
10