The actor was arrested this month, accused of paying $15,000 to fix her daughter’s school test 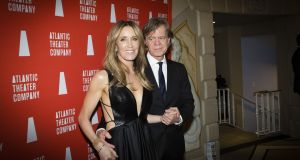 Felicity Huffman and William H. Macy at a gala for the Atlantic Theater Company in New York, March 6, 2017. When the actress was implicated in the college admissions scandal, it stunned people in her acting circles and at the prestigious high school her older daughter attends. Photograph: Deidre Schoo/The New York Times

Felicity Huffman hated the myth of the perfect mother. “She should go the way of the dinosaur, extinct,” Huffman wrote in exasperation a few years ago on her blog, where she agonised about losing her cool with her children and not being an easygoing mother — and where she also sold mugs bearing cutesy quotes like “I Can’t Adult Today” and “Good Enough Mom.”

Yet Huffman, who is 56, was competitive and driven. Maybe no one could be a perfect mother, but she could still try to be a great one. She joined parents’ committees, threw elaborate Halloween parties using top of the line studio props and, with her husband, William H. Macy, leveraged her celebrity to support the prestigious Los Angeles County High School for the Arts, where Sophia, the elder of their two daughters, studied theater and thrived.

Huffman, an Emmy winner for Desperate Housewives, and Macy, an Oscar nominee for Fargo, taught acting workshops at the school, hosted fundraising galas, and donated at least $20,000 to its foundation, while fellow parents basked in their proximity to such a beloved Hollywood pair.

They are not quite as beloved anymore.

Huffman was led out of her Hollywood Hills home by FBI agents on March 12th, accused of making a $15,000 payoff so a crooked test proctor could tinker with Sophia’s SAT answers.

Her arrest came as part of a broad investigation of a cheating and bribery scheme that involved 50 people and has fuelled a national debate about fairness in college admissions.

The scandal left some administrators at the high school in damage-control mode, and people close to Flicka and Billy, as the couple are still known in their old theatre circle, reeling and conflicted: What on Earth had Huffman and Macy been thinking?

In the criminal complaint outlining the case, investigators said multiple emails and recorded telephone conversations showed that Huffman’s involvement in the cheating conspiracy began in summer 2017 and continued into February of this year.

Macy has not been charged, but the complaint said that he had agreed to the cheating plan for Sophia, and accused him of plotting the same cheating arrangement for their younger daughter before the couple abandoned the idea.

Friends and fellow parents at Sophia’s school lamented the fact that Huffman has become one of the few public faces of the scandal, even though her case involves a relatively small sum compared with what others are accused of spending; one father is said to have made $1.2 million in payoffs.

Theater producer Frederick Zollo, who worked with Huffman and Macy on plays years ago, said that while payoffs were “obviously a very stupid thing,” Huffman had already been punished enough. “I think the public humiliation is more than sufficient,” he said.

Playwright David Mamet, the couple’s friend and collaborator of many decades, sprang to their defence in an open letter urging people to hate the game of corrupt college admissions rather than hate these players, whose parental instincts were understandable.

But some who knew the couple in the past saw hypocrisy in Huffman and Macy’s actions and in the friends who protectively stood by them. “People shield people of power; nobody wants to speak truth to power because they might need them,” said Théo Cohan Feldman, who, along with Huffman, Macy and Mamet, was among the founding members of the Atlantic Theater Company in New York.

Feldman rejected the notion that this might have been a mere mistake. The couple, she said, had always been very smart and very deliberate.

“I don’t think that has changed with fame and success,” Feldman said. “They took a calculated risk.”

Huffman met Macy in New York in the early 1980s when he was leading acting workshops with Mamet and she was a theatre student at New York University.

Huffman came from privilege: Her maternal grandfather helped found Morgan Stanley, and her father was a partner there. She was the youngest of eight, and joked that her mother named her Flicka — officially it was Felicity — because she had run out of names.

When Huffman was 7, the family moved from Bedford, a New York City suburb, to Little Woody Creek, Colorado, and into a white clapboard house that sat on 27 acres, where six of the sisters, including Felicity, would later get married.

In an interview with the Television Academy, Huffman said she vividly recalled first meeting Macy, with his sweep of blond hair and Lacoste shirt; per the fashion of the time, he had flipped the collar up. He was 12 years her senior — and married — and Huffman found him funny, cool and smart. “Like a god,” she said.

The pair eventually began dating and, after years of being on and off, married in 1997.

Among their theater friends in New York, they were deeply admired. “She and Bill are such caring people, intelligent people,” said Bradley White, an actor who knew them here. Huffman, he said, was “someone with a strong spine, and a heart of gold.”

She was also known for being unafraid to be forthright, sometimes to the point of harshness, a trait of which she was evidently aware. One friend recalled visiting the couple’s home in the Outpost Estates neighborhood of the Hollywood Hills and spotting a largish sign in Huffman’s office. “Be nice,” it read.

By the time Sophia was born, in 2000, Macy had hits like Fargo, Boogie Nights and Air Force One, behind him, and Huffman had starred in Aaron Sorkin’s acclaimed television show Sports Night. Her star continued to rise after their second daughter, Georgia, was born in 2002.

Huffman landed a starring role in Desperate Housewives and received an Oscar nomination for her lead role in the 2005 film Transamerica.

In 2012, when Desperate Housewives ended and a year after Macy’s show Shameless began, she started her blog, and named it “What the Flicka.”

It was pulled offline a few days after her arrest. But before it vanished, it was a gold mine for anyone seeking inconsistencies between the actions Huffman is charged with and the version of parenting she espoused on the blog, where she touted the importance of honesty, confronting fears and reading books like The Blessing of a B Minus, which cautions against micromanaging the lives of children.

Huffman used the blog to deploy you-go-girl affirmations and confessionals. “If our kids are alive and decent citizens at 18, we all deserve a medal,” she wrote at one point, punctuating the thought with an expletive before “medal.”

In another post, she wrote: “I have made so many mistakes as a parent it actually makes me nauseous to think about it.”

She also seemed painfully aware of her privilege and ability to disconnect from troubling world events, wondering, in a 2014 post, how she could stomach shopping at Target given the massive garbage patches in the oceans, or blithely prepare for her daughter’s slumber party when hundreds of Nigerian schoolgirls had been kidnapped by Boko Haram.

The High School for the Arts, where Sophia is a senior, is tuition-free and highly selective, and its 600 students must audition to get in. Though the school is public, a well-connected foundation helps bridge the nearly $1 million annual gap between taxpayer funding and the arts program’s operating costs.

Its donors list includes Disney, ABC, NBCUniversal, Showtime, Sony, Paul Thomas Anderson and Frank Gehry, who has one son teaching at the school and another who is an alum. In 2017, another parent, comedian Jeff Garlin, hosted a fundraiser for the school featuring Jane Lynch, Sarah Silverman and Tommy Chong.

Even against this high-octane backdrop, Sophia, who is 18, stood out. She won awards and accolades and frequently landed leading roles in dramatic productions, including the part of Mary Jane in a one-act Spider-Man play in January.

It is unclear if Sophia knew anything about her SAT answers getting fixed. According to the criminal complaint, after a bribed proctor got involved, her score improved by some 400 points from her preliminary SAT exams.

At the school, students and parents interviewed largely feel Sophia was unfairly swept up in the scandal. Beyond feeling disappointment and anger, people were puzzled. Sophia was talented in her own right. Some universities were now threatening to reject students whose parents had been arrested. Why would Huffman and Macy take the risk?

Not everyone was surprised that a parent might cross a line like this one. Camilo Estrada, who graduated from the vocal program there in 2012, said he had seen parents hector teachers — including one incident backstage during a school performance — for not giving their children more stage time.  - New York Times

Melanie Lundquist, a philanthropist whose foundation has donated $60 million to Los Angeles public schools, said bribes and payoffs were just a logical next step for parents with resources to buy special access to colleges. “It progressed from buying a building to being this bold about it,” she said.